The Red-bellied Macaws (Orthopsittaca manilata) are small green macaws that are found in the Amazon basin of tropical South America, where they have a wide range.

Even though they are locally common, their numbers have been declining in areas where their preferred feeding and nesting trees have been removed to make place for cattle ranching, or for use as posts.

Additionally, these parrots are popular as pets and are often captured for the pet trade. However, even though these parrots are relatively easy to catch, they are not easy to maintain in captivity, mostly due to their very specialized diet. Captive breeding successes are also very rare, probably for the same reason.

These birds were listed as Endangered in 2007 by the International Union for Conservation of Nature (IUCN); however, as of 2009, this species has been down listed to the status of “Least Concern,” mainly because they appear to be more common in the wild than previously assumed.

However, due to their very specialized habitat requirement and the risk of continued harvesting of their favored palm trees and destruction of their habitat, these birds remain at risk of extinction.

The Red-bellied Macaws occur naturally in southeastern Colombia south to eastern Ecuador, eastern Peru and northern Bolivia, and east through Venezuela, the island of Trinidad , the Guianas south to north central and northeastern Brazil. Their southern limit in Brazil is the south-central and northwestern cerrado bordering the Amazon Basin.

They are found in Mauritia palm groves, as well as forests and swamps with Aguaje or Moriche Palm Trees (Mauritia flexuosa).

These parrots depend heavily on these trees, as they almost exclusively feed on their fruits, nest in the cavities of dead palm trees close to water, or use these trees for roosting. Large numbers of these parrots can be seen at these roost sites at dawn and dusk.

Even though these parrots are mostly sedentary, seasonal movements in response to the regional availability of the fruits of these palm trees have been recorded. 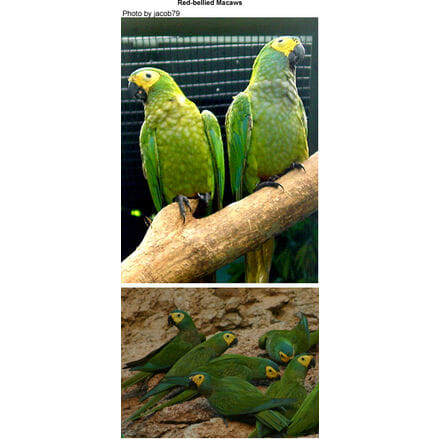 Red-bellied Macaws measure about 18 inches (46 cm) in length – including their long, pointed, graduated tails. Their average weight is about 10.5 oz (300 g).

These parrots are most easily identified by their bare yellow facial skin.

The plumage is mainly green, except for a red belly patch, blue forehead and upper wings, and a grey tint to the chest and chin. The underwings and undertail are dull yellow. The lower abdomen is brownish-red.

Immature birds resemble the adults, except their plumage is duller, their tails are shorter and darker.

But the most obvious identification can be made by the color of their upper beak – they have grey beaks with a conspicuous horn-colored mid-line stripe running along the length of the top of the upper beak. This stripe disappears when they are about 1 to 2 years old.

In the wild, they eat the fruit and seeds of palm trees, especially the Moriche Palm.

Red-bellied Macaw usually nest in the cavities of trees – their primary choice being the Moriche Palm. The average clutch consists of 2 – 4 white eggs, which are incubated by the female for about 27 days. The young fledge (leave the nest) when they are about 77 days old.

Red-bellied Macaws are known for their high-pitched screams. While feeding, they make purring sounds.

Noisy flocks can be heard in flight or at favored feeding sites.