They are usually observed flying in pairs or in family groups. Occasionally, larger groups are feeding high up in the canopy or other favored feeding sites.

They have very powerful beaks that can generate a pressure of 500 up to 2,000+ psi (pounds per square inch). Humans, for example, average a bite force of around 150 psi. These powerful birds are capable of crushing or opening even the hardest nuts and seeds.

These birds are on the endangered species list due to loss of their natural habitat caused by deforestation, as well as illegal capturing of chicks and adults for the international pet trade.

Locals also hunt them for their meat and decorative feathers. 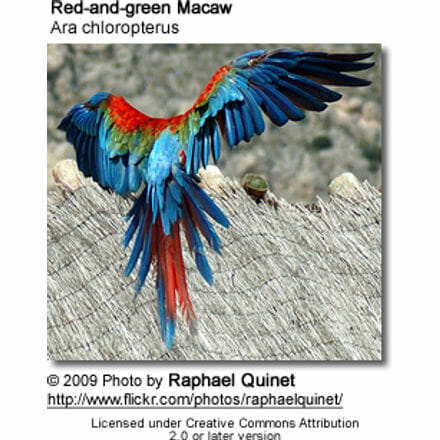 Their natural habitat extends from eastern Panama in Central America south across northern South America, east of the Andes, to Bolivia, Brazil and Paraguay.

These birds have also been introduced an in few urban areas in the United States, Europe and Latin America.

They are mostly found in tropical evergreen and riparian forests, near rivers and clearings with big trees.

Seasonal movements in response to fruit availability have been noted.

These parrots were named for the brilliant colors of their plumage, most of it is a vibrant red except for the blue black, rump and flight feathers, and the conspicuous yellow patches on the wings (on the upperwing coverts).

The outer tail feathers are blue and the central tail feathers red. The undersides of the wings and tails are dark red with a glossy gold iridescence.

The facial skin is whitish without any feather lines (distinguishing it from the Green-winged Macaws).

The upper bill of its powerful beak is light tan in color with black at the tips and base, and the lower bill is black. The legs and feet are also black.

Males and females look mostly alike; except the males may have longer feathers and slightly larger bills.

Immature birds have shorter tails and the lower bills of their beaks are grey. Their bare facial skin is pinkish-white and their legs and feet dull grey. The color of their eyes changes over time from black to grey to white to the adult eye coloration of light yellow.

They are often confused with the Green-winged Macaw. They are most easily distinguished by the following:

In their natural habitat, they feed on palmfruits, figs, berries, seeds, nuts and pods. They also take insects and their larvae – particularly during the breeding season, when their need for protein increases. They also supplement their diet with nectar, leaf shoots and flowers.

Nuts, leaves, berries and seeds from the rainforest make up the bulk of its diet. It’s strong, hooked beak is perfect for breaking nuts and seeds. Interestingly, the scarlet macaw can eat fruits toxic enough to kill other animals.

This could be because they also eat large amounts of clay found on the banks of rivers, which is thought to neutralize plant poisons.

The locations of at least 120 known clay licks are known in the Amazon basin, where large flocks of them are found feeding. Some of the more accessible locations have become tourist attractions.

They reach reproductive maturity when they are about 3 to 4 years old and form monogamous pair bonds that last a lifetime.

Pairs are usually seen together, except when one of them is incubating eggs or brooding / taking care of young chicks. Pairs show affection by feeding and preening each other, and licking each other’s faces.

Nesting usually occurs once every one or two years, and the breeding season varies by their range, rainy seasons and availability of food. Those found in the southern parts of their range usually start breeding in December and those further north may get started in late December to January. If conditions are right, they breed year-round.

These cavity nesters will usually raise their young in the holes of dead or live tall canopy trees (such as broken tree limps) or holes excavated by other birds, including large woodpeckers. Occasionally, they excavate their own cavities in soft snags.

The average clutch size consists of one up to four white, rounded eggs (mostly one or two), Most of the incubation (brooding) of the eggs is undertaken by the female; while the male protects the nest and brings food.

He will assist with the brooding, as needed. The eggs are incubated for 24 – 28 days to hatching. Depending on the age of the chicks, the parents will feed them 4 to 15 times each day.

The younger ones have to be fed more often since their crops are smaller. As the chicks grow larger, their crops can hold more food and the number of feedings each day goes down.

The chicks will fledge (leave the nest) when they are about 97 to 140 days old and are independent about one or two years later. The parents won’t get started on a new brood until their previous young have become independent.

They emit harsh, loud screeching calls, which are somewhat more drawn out than calls made by the Blue-and-gold Macaws. Their vocalizations include harsh screeches, guttural squawks and growls.

They can expect to live 33 to 50 years. Captive birds that received quality care have lived to the ripe, old age of 80.

Their shorter lifespan in the wild is mostly due to predation of the young (mostly), nesting or vulnerable adults by monkeys, toucans, snakes, and other large mammals.

They reach reproductive maturity when they are about 3 to 4 years old.