The Green-winged or Red-and-green Macaws (Ara chloroptera) are the most common of the large macaws and are widespread in the forests of South America.

However, in recent years their numbers have declined due to destruction of their habitat, illegal capturing for the pet trade, and hunting; and these magnificent birds are now considered in danger of extinction (CITES II).

They are the second largest members of the macaw family – the largest being the Hyacinth Macaws.

They have very powerful beaks that can generate a pressure of 500 up to 2,000+ psi (pounds per square inch). Humans, for example, average a bite force of around 150 psi. These large macaws are capable of crushing or opening even the hardest nuts and seeds.

These majestic parrots have been kept in captivity as far back as the 17th century. Nowadays, these “Gentle Giants” – so named for their large size and gentle disposition – are well established in aviculture and are readily available as pets.

They are fairly long-lived, capable of living 60 years or longer.

They occur naturally from eastern Panama in Central America south across Northern South America, from Colombia east to Venezuela, the Guianas and south through Brazil (Parana and Mato Grosso) to Paraguay and west to eastern Ecuador, eastern Peru and northern and eastern Bolivia. Rarely, they are found in northern Argentina (Formosa).

They are found in tropical rainforests along lowlands and the lower foothills of interior regions, mostly avoiding coastal areas.

These forest birds spend most of their days foraging in the canopy. They are usually seen in pairs or small family groups. 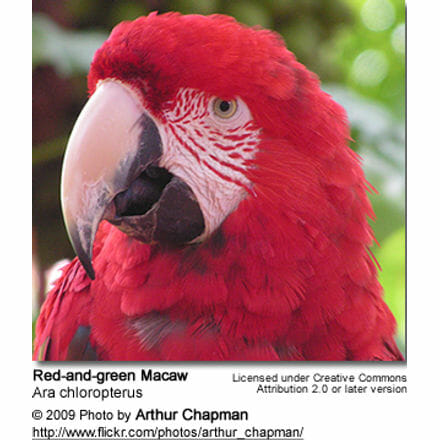 The chest is bright red. The “shoulders” or upper wings are red, as is the upper back and head; the middle wing feathers are green, turning blue toward the tips. On the tail, iridescent teal feathers are surrounded by red.

There are characteristic bright red lines around the eyes formed by rows of tiny feathers on the otherwise bare white skin patch.

The upper bill is horn-colored with black on the sides and the lower bill is dark grey or black.

The eyes are yellow and the legs are grey.

Males and females look alike, except for females usually being slightly smaller in size. However, this method of sexing these parrots is not very reliable and DNA or surgical sexing is generally recommended in cases where the gender is important (such as birds being placed into breeding programs). 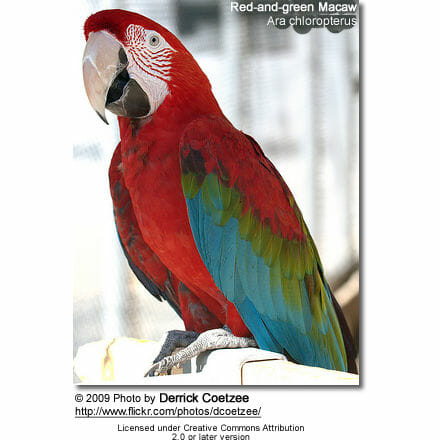 Look like adults, but have shorter tails, grey eyes and the lower bill is grey with a white base.

They are often confused with the Scarlet Macaw. They are most easily distinguished by the following: 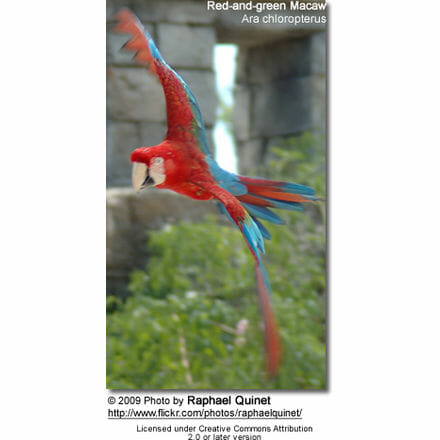 For more information on what to feed your Macaw, click the link!

They are monogamous, forming pair bonds that last a lifetime. However, if they lose a mate, they will usually find another.

The average clutch consists of 1 – 3 eggs, which are laid in the cavity of a tree.

The eggs are incubated by the female for about 25 – 28 days. The young leave the nest about 90 days after hatching.

In captivity, these macaws are often crossed with other large macaw species to develop a number of hybrids, such as Buffwing, Calico, Harlequin, Ruby, Cameo, Flame and Jubilee Macaws.

Their calls include different vocalizations, such as shrieking, or yelping and cawing sounds made by Common Crows.

Historically, there has always been a lot of confusion with the Scarlet Macaws, which also have a mostly red plumage. However, only the Green-winged Macaw has a broad green band on the wings (which is mostly yellow in the Scarlet).

The confusion also extended to their naming. The macaw with the green wing band – Ara chloroptera – was known as the Green-winged or Red and Blue Macaw, Red-blue-and-green or Red-green Macaw, Crimson or Maroon Macaw.

Its smaller cousin with the yellow band – the Ara macao – was referred to as Red or Red and Gold Macaw, Red and Yellow, Red-yellow-and-blue or Scarlet Macaw.

Dr. Osmond Hill researched these species, and in 1949 suggested as a way of ending this mix-up to refer to the Ara chloroptera as the “Green-winged Macaw” and the Ara macao as the “Scarlet Macaw”.

The Green-winged Macaw as well as the Hyacinth are often referred to as “Gentle Giants” – in reference to their large size yet very gentle personalities.