This lory is endangered in its natural habitat due to habitat loss (Cites II).

The Yellow-backed Lory is the same size as the nominate Chattering Red Lory, averaging 12″ (30cm) in length (including tail).

They also look very similar to the nominate form, except for the large yellow patch on the back (mantle). The flight feathers are also a slightly brighter green. 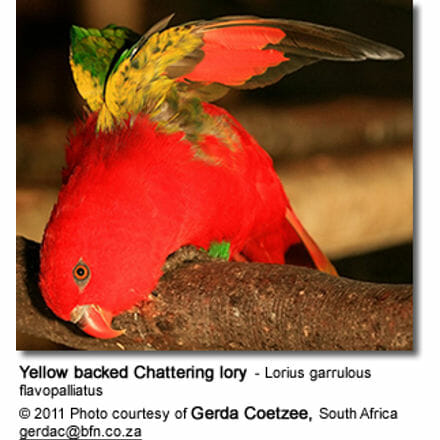 These are amongst the better talking lory species and perhaps one of the smartest at escaping or just being all around trouble makers. They have great personalities and are always up to mischief. Food and water bowls must be attached to the cage, and even then they will likely become toys!

They make a somewhat vocal pet. They produce a shrill, whistle-like call. Thankfully they don’t do it very frequently. Still quieter than an amazon. (Description by Dick Schroeder – Owner of Cuttlebone Plus and Expert Breeder / Keeper of Lories).