The Yellow-crowned Parakeet or Yellow-fronted Parakeet (Cyanoramphus auriceps) is endemic to New Zealand and neighboring islands. Its numbers are decreasing and this species is uncommon throughout its range.

The larger and more brightly colored Forbes’ Parakeet was formerly considered a subspecies of the Yellow-crowned Parakeet – but recent research has demonstrated it to be an independent species.

The species is found across the main three islands of South and North Islands of New Zealand,subantarctic Auckland Islands, as well as Three KIngs, Little Barrier, Kapiti and Stewart Islands.

The Yellow-crowned Parakeet shares most of its range with the mainland Red-crowned Parakeet form, being found on the main islands and mot off-shore islands, and as far south as the Auckland Island group.

This species prefers mixed Nothofagus-Podocarpus forests, usually at higher altitude than the related Red-crowned Parakeets (C. novaezelandiae). On those small islands where both species co-exist, they are typically found in denser, unbroken forests. The Yellow-crowned Parakeet is rarely found in secondary forest, and is absent from logged forests. This species relies heavily on forest preservation for its future survival. The Yellow-crowned Parakeet is still found in moderate numbers, but only in the largest and least disturbed forest tracts. 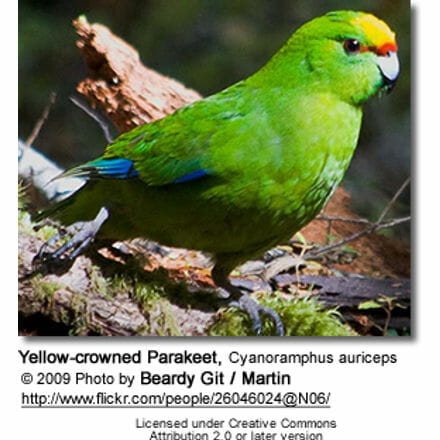 The plumage is mainly green. The breast, abdomen and under tail fathers are yellowish-green. The narrow red band to its forehead extends to the eyes. The crown is yellow. There is a red patch on each side of the lower back. The outer webs of the flight-feathers are violet-blue. The irises are orange-red and the bill is a pale bluish-grey. The feet are grey.

Similar Species ID: The Red-crowned Parakeet (C. novaezelandiae) has red crown and band from bill to behind eye.

Captive birds have lived up to 10 years. 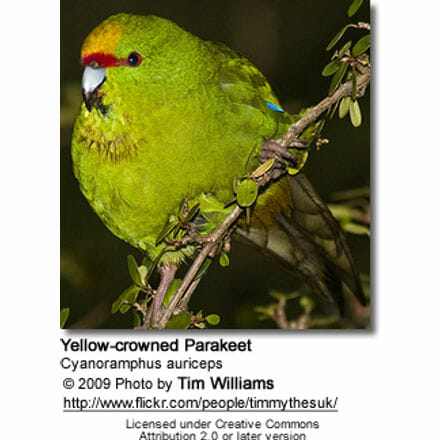 Breeding occurs mainly in October through December. The average clutch consists of 5 to 9 eggs which are incubated for about 19 days.

Breeding and mortality were closely related to cycles of beech seeding. Following a heavy beech mast, parakeets fed extensively on beech seed, and bred not only during their normal late summer breeding season, but right through the following winter, spring and summer. During this time, the parakeet population increased dramatically. The following autumn, the population a sharp decline was noted as a result of the depletion of beech seed and high rates of predation by Stoats (Shorttail Weasel) and other predators. Nesting parakeets are particularly vulnerable to predation because they are cavity nesters and their chicks are very noisy immediately before fledging easily attracting the attention of predators.

The Yellow-crowned Parakeet is well represented in both local and overseas aviaries.

This species hybridizes readily with the Red-crowned Parakeet and pure-bred stock is difficult to find. In the wild, both Kakariki species can often be seen in the same vicinity, but naturally occurring hybrids are rarely reported.

At this time, the Yellow-crowned Parakeet’s status both in the wild and in captivity seems reasonably secure, although continued forest clearance puts its continuing existence at risk.

This species’ range and numbers have declined in the last 100 years due to predation from introduced species, such as Stoats (Shorttail Weasels) and habitat destruction. Unlike the Red-crowned Parakeet, the Yellow-crowned Parakeet has not been extirpated from the mainland of New Zealand, but its population has decreased and this species is now uncommon throughout its range.

Even though precise population estimates are unavailable and its present population trends are unclear, this species may, at this point in time, be stable and its range may have expanded in some areas due to conservation efforts.

Past declines have been attributed to deforestation, habitat modification and the introduction of alien predators, particularly cats, stoats (shorttail weasels) and rats. On offshore islands, the Red-crowned Parakeet (C. novaezelandiae) is usually much more common and on Solander Island may have completely replaced the Yellow-crowned Parakeet. On Auckland Island, there is an unnaturally high rate of hybridization between the two species.

This is a monotypic species (only one species). Mitochondrial DNA analysis has shown that the Malherbe’s Parakeet or Orange-fronted Parakeet (C. malherbi) is a separate species and not just a color variation of the Yellow-crowned Parakeet, as was previously assumed.