The species is named after Alexander the Great, who is credited with the exporting of numerous specimens of this bird from Punjab into various European and Mediterranean countries and regions, where they were considered prized possessions for the nobles and royalty.

The species name eupatria has its origins from Latin and/or could be a Greco-Latin combination. Where the prefix eu translates into good or noble and the suffix patria is a Latin word translating into fatherland or ancestry. Consequently, the scientific name means of noble fatherland or of noble ancestry.

All Alexandrine Parakeets (irrespective of age, gender and/or sub-species) boldly display a maroon (reddish-brown) patch at the top of their wing coverts (commonly called ‘shoulder’ patch). The shoulder patch is seen in parakeets at their first feathering before fledging from their nests. The lower and upper mandible are red with yellow tips. The adult’s irises are yellowish-white and the periopthalmic rings are light grey. The legs are grey except in the P. e. siamensis (Laos’ or Siamese sub-species) where they are yellowish-grey.

The species is dimorphic in adulthood (3 years and older). The immatures are monomorphic and are similar but duller in appearance to that of the adult females. Adult males always show pitch-black neck rings and large pink bands on their napes (commonly called nape bands). Often males only display a little band of blueish-grey above their bold pink nape-bands. Adult females frequently show neck ring shadows that are anywhere between light and dark shades of grey. Females never display true black feathers in their neck-rings. Immatures of either genders are very similar to adult females but as with all genuine parakeet species, the young Alexandrine Parakeets always display shorter middle-tail feathers and thus shorter tails than adults. The adult feathering usually is acquired between 18–30 months of age, but may sometimes show up as young as 12 and/or as old as a full 36 months of age. Consequently, it may be difficult to identify the sex Alexandrine Parakeets by sight with absolute certainty until they are a full 36 months of age. The P. e. nipalensis ssp. (Nepalese Alexandrine Parakeet) is the largest of the species measuring 62 cm (24.5 in) in total length with a wingspan averaging between 20–24 cm (8–9.5 in). It is thus recognized as the world’s largest genuine Parakeet (short to mid sized Long-Tailed Parrot) species. It looks much like the Nominate sub-species. However, the feathers on the chest and abdomen in both genders display whitish-grey sheens, the cheeks and napes (back of a bird’s neck) are washed with blue and the adult males display large pink nape bands.

The P. e. magnirostris ssp. (Andaman Island’s Alexandrine Parakeet) is slightly larger than the nominate sub-species, displaying a wingspan anywhere between 20–22.5 cm (8–9 in). It looks much like the nominate race. However, the feathers on the chest and abdomen in both genders display whitish-grey sheens. The maroon ‘shoulder’ patch is of a much redder (or less brownish) colour than of that of the nominate. The beak is larger and more massive. The adult males display large pink nape bands, the blue sheens above the nape-bands are restricted and sometimes absent in some specimens.

The P. e. avensis ssp. (Indo-Burmese Alexandrine Parakeet) is of same size as the nominate species, also measuring 58 cm (23 in), displaying a wingspan averaging anywhere between 19.4–22 cm (7.5–8.5 in) and looks much like the Nominate ssp. However, the top of the head and the nape are of a yellowish-green, the blue sheens are restricted to the cheeks and thus absent in the nape. The adult males display thinner and pinker nape-bands.

The P. e. siamensis ssp. (Laos or Siamese Alexandrine Parakeet) is the smallest of the species, measuring 56 cm (22 in), displaying a wingspan averaging anywhere between 17.9–20.5 cm (7–8 in) and looks much like the Nominate ssp. However, the top of the head and the nape display pale-blue sheens that extends to the crown in some specimens. The cheeks are yellowish-green, the ‘shoulder’ patch is of a nearly brownless red colour and the legs display a pronounced yellowish shade. 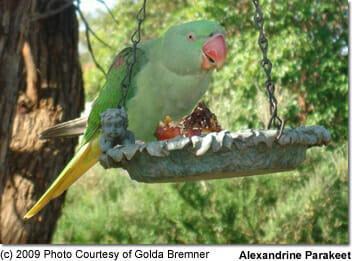 Alexandrine Parakeet is a gregarious and noisy species, forming huge flocks at the evening roosts. Its flight is swift and direct, and the call is a loud scream, similar to, but deeper than Rose-ringed Parakeet, P. krameri.

Trapping pressure to cater to the demands of the pet trade have caused a drastic decline in this species. It is illegal to trade in Alexandrine Parakeets in India and yet these birds are sold in broad daylight in urban bird markets, suggesting that the Indian government is allocating insufficient resources towards the protection of this beautiful species.

The following sub-species, many of them allopatric are recognised based on geographical distribution:

The species has naturalized (species that live and reproduce outside its natural distribution range) itself in numerous European countries. Particularly in Germany, in the south of England, in Belgium, in the Netherland where it generally lives among or along side flocks of naturalized Psittacula krameri (Ringnecked or Rose-ringed Parakeet).

The bird is popular among aviculturists. It is ideal for outdoor aviaries and cannot tolerate temperatures less than 5 °C (41 °F). They breed well in aviaries. The parakeet is one of the oldest captive Parakeet species on the Eurasian continent. It gets its name from the legendary Emperor Alexander The Great, who had numerous specimens exported back to various Mediterranean countries by his legionaries. The parakeet has since then been popular among the nobles throughout the Empire’s Anatolian, European and Mediterranean countries.

It is an active species, likes water (bathing, misting, raining and showering) and readily accepts diverse and/or new foods. It chews vigorously and hence it is important to keep the perch non-toxic without chemical products such as disinfectants, fungicide, insecticides or pesticides. The Alexandrine Parakeet has an average lifespan of 40 years in capitivity and as with all other parakeets, they are among the top mimics.

Breeding season is from November to April in their natural distribution range.

Average clutch size is 2–4 eggs measuring 34.0 x 26.9 mm (1 x 1.3 in). The average incubation period is 28 days usually starting with the laying of the second egg. The chicks fledge around seven weeks of age. They are reared for about three weeks and are typically weaned between 12 to 16 weeks of age. They are critically endangered in Pakistan specially in Punjab province. This is mostly due to loss of habitat, like cutting of old tress and excessive poaching of their new born chicks. Although it is officially banned in Pakistan to sell these parrots but they can be found openly being sold in markets of Lahore.

The Alexandrian originates from India and is well known for its mimicking abilities.

These intelligent birds make good pets for those willing to provide continual obedience training. If neglected or not given the appropriate training, Alexandrians become prone to feather picking and other behavioral problems.

The Alexandrian’s large and powerful beak has a strong bite and for this reason is not recommended as a pet for children.

A larger cage is required for the Alexandrian to accommodate its beautiful, long tapering tail.

(The above information and chart below has kindly been provided by Dr. Rob Marshall, Avian Vet – http://www.birdhealth.com.au) Description: as eupatria, but breast and abdomen feathers in both sexes with grey-white tinge; broad pink band to nape (back of the neck); blue tinge to nape above pink band mostly very restricted, not occurring in some birds; shoulder patch lighter in many birds; bill larger and heavier; slightly larger | Length: 60 cm (24 ins), wing length 200 – 225 mm (8 – 9 ins)

Alexandrines as Pets .. Description … Distribution in the Wild and Habitat … Sub-species