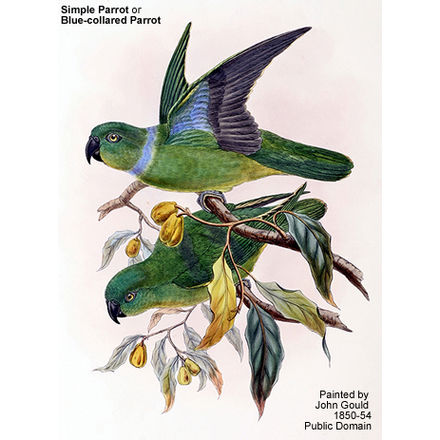 Its plumage is mainly green with a black beak. The forehead, sides of head, breast, abdomen, upperside of tail, upper and under tail-coverts are yellowish-green. They have yellow wing bends, blue underwing coverts and a pale yellow iris.

Adult males have a blue collar across upper breast to lower neck above the mantle.

Females lack the blue collar, but have a bluish tinge to the crown and nape (back of the neck).

Immature birds look like females, but other than a faint bluish tinge, there is no blue visible. They have a paler bill.

Its calls in flight are distinctive, namely, a loud rolling series of notes repeated continuously.

The Lilac-crowned Parrot (Geoffroyus simplex buergersi) is found at the higher elevations of New Guinea: Western New Guinea, south-eastern Papua, specifically between the 500 to 2300m range. This parrot inhabits humid hill forest and forest edges, and usually seen in flocks of up to 200 parrots.

Description: The Lilac-collared Parrot looks like the Blue-collared or Simple Parrot described and featured above, except the collar is lilac-blue and more extensive. The under wing-coverts are violet-blue. They are also generally larger, averaging 9.5 inches (24 cm) in length (from head to tip of the tail). Hens look like the female of the nominate form, but the under wing-coverts are violet-blue and she is also larger.