Thin-shelled, soft-shelled, no-shell, porous, misshaped/deformed eggs, and other eggshell irregularities can occur due to a variety of factors. The most common cause of soft / no-egg shell eggs is dietary or environmental.

Thin-shelled, soft-shelled, no-shell, porous, misshaped / deformed eggs and other egg shell irregularities can occur due to a variety of factors.

Situations where a sudden drop in egg production occurs are most likely to be infectious. In the absence of obvious signs of disease (sudden change in egg laying / obvious disease symptoms, such as respiratory, loss of weight, etc.), potential environmental and dietary issues should be explored and, once identified, remedied.

A loss of egg production or the possibility of egg abnormalities also increase with age. 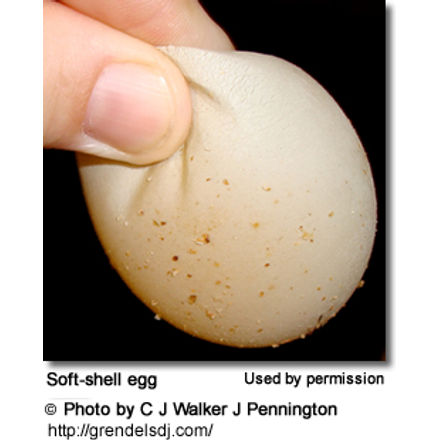 The eggshell is a protective layer for the embryo. 95% of the shell consists of calcium carbonate that builds up on the inner membrane.

Deficiencies involving vitamins E, B12, and D as well as calcium, phosphorus, selenium impact the formation of the egg shell; most commonly resulting in thin or soft shells or eggs without a shell (only the inner and outer membranes and the yolk).

Remedying Nutritionally Deficiencies: Supplementing the hen’s diet with ground eggshells, ground limestone, limestone flour or oyster shells (offered separately, or sprinkled over or mixed in with the chicken’s feed) – in combination with exposure to natural sunlight or supplementation with Vitamin D3 (NOT Vitamin D2) – are effective ways of boosting calcium levels, thereby effectively preventing or remedying eggshell abnormalities caused by calcium deficiency.

If applicable, decrease or discontinue treats that reduce the percentage of calcium that the chicken derives from its diet. (The higher the percentage of low-nutritional-value treats a bird gets directly impacts the quality of its overall nutrition.)

Grit is sometimes provided in the mistaken belief that it contains calcium – it does not and, therefore, has no effect on egg quality.

EXCESSIVE consumption of phosphorus or calcium is likely to result in eggs that with an abnormally thick shelled or have rough shells.

Inherited / metabolic conditions may inhibit the absorption of nutrients resulting in malnutrition in spite of adequate dietary provision.

Vitamin D3 is required for calcium absorption and utilization; if a hen is deficient in Vitamin D, this can also impede the formation of the shell.

Risks Associated with Thin/Soft-shell Eggs: One of the big risks of soft-shelled eggs that they can easily burst on exit and become retained resulting in internal infections and often in death of the hens.

This common infectious disease only affects chickens of all ages and is caused by Coronavirus. It targets the respiratory tract, as well as the reproductive organs and the urinary system.

IBV is the most contagious poultry disease; once introduced into a flock, the infection rate is 100%. Therefore, if some hens are unaffected, this disease can be excluded.

Infectious Bronchitis is suspected if no other environmental reason can be identified, and the hens have previously produced well, and then all of a sudden started laying poor quality eggs.

This disease may affect both the external and internal quality of the eggs, which can be misshapen or soft-shelled. In those eggs that have a shell, the egg white inside the egg is runny.

Initially, respiratory symptoms are typically (but not always) noted and generally the egg production decreases and the egg quality deteriorates over time.

There is no effective treatment against this, although birds often recover, they may never be good egg layers and the eggs they do lay may never be of a good quality again.

The spread of this disease can only be stopped by quarantining infected birds and sanitizing / disinfecting the premises. A vaccination is available (Nobilis by Merck), but vaccination is not always effective in preventing the disease.

Rarely proves fatal; however, increases the hens’ susceptibility to other pathogens, such as e-coli or mycoplasma infections.

Those that recovered from this disease will be immune to further exposure, but may never lay well again due to damage to the uterus/shell gland.

To a lesser extent, the following infectious diseases are possibilities …

This herpes virus causes respiratory symptoms in chickens. It is a reportable disease in several U.S. states. Infected chickens become life-long carriers and shed the virus during times of stress. Infected birds may show the following symptoms: wet irritated eyes, sneezing, nasal discharge, failure to thrive, stunted growth, and decreased egg production. As this disease progresses, birds may experience difficulty breathing, a bloody discharge from the nose and mouth can be noted. They may cough and expel bloody mucus. Birds typically shake their heads to clear the mucus from their noses and mouths, which results in blood stained mucus on the feathers. Symptoms may clear up; however, once infected, chickens become life-long carriers of ILT and can shed the virus during times of stress.

This virus is susceptible to sunlight and common disinfectants.

The natural host for this viral disease occurs is water fowl, such as ducks, geese, coots and grebes. Antibodies have also been recorded in herring gulls, owls, storks, swans, guinea fowl and pigeons. In the 1970s, the causative virus – duck adenovirus A – spread to chickens and quails, and is likely attributed to a contaminated Marek’s disease vaccine.

This disease mostly occurs in Europe, Asia, Africa and Latin America; and has not been identified yet in the United States or Canada.

One of the main symptoms of this disease is that apparently healthy birds produce soft-shelled and shell-less eggs.

There is no treatment. This disease can best be prevented by separating chickens from other birds (particularly water fowl); quarantining infected birds and sanitizing the environment. A vaccine is available and typically given during the growing phase, when the birds are 14 – 18 weeks old.

Caused by feeding grain (in many instances corn, but also wheat and barley) contaminated with ochratoxin produced by Aspergillus ochraceous or Penicillium viridicatum (fungi).

The clinical signs can be helpful, but definitive diagnosis is from feed analysis for the presence of toxin.

The solution would be to supply uncontaminated feed (without any mold) and ingredients; sanitizing the feed and ingredient handling tools and equipment; and potentially adding antifungal agents to the feed. Drought, insect damage to the grain, and long storage time of the feed is shown to increase susceptibility to fungal growth.

Rough Egg Shell or Abnormal Shell Texture can be a result of:

Depigmentation (loss of pigment) of the brown egg shell can be a sign of Infectious Bronchitis, Egg Drop Syndrome (scroll up for information) or high stress levels among the brooding hens.

Speckled Egg Shell or Spots inside the Egg

Speckled / mottled egg shells can be caused by a Manganese deficiency or high or low extremes in environmental humidity. 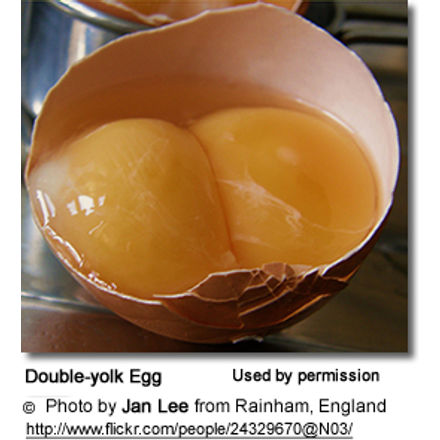 White yolks: Can be caused by capillary worms or other unknown disease condition. Can also be affected by diet

Olive or Salmon-colored Yolks: Caused by a diet with a high percentage (5%+) of cottonseed meal containing gossypol or cyclopropene fatty acids.

Double-yolk eggs occur when ovulation occurs too rapidly or when one yolk becomes joined with another yolk. This is most commonly seen in young hens that have not reached reproductive maturity yet and have unsynchronized reproductive cycles.

Yolkless eggs (also known as “dwarf” or “wind” eggs): Most commonly occurs in young hens that lay eggs before their laying mechanism is fully matured. In mature hens, this could be indicative of pieces of reproductive tissue breaking away, stimulating the egg producing glands to treat these pieces of reproductive tissues like yolks, wrapping each in albumen, membranes and a shell as they travel through the egg tube.