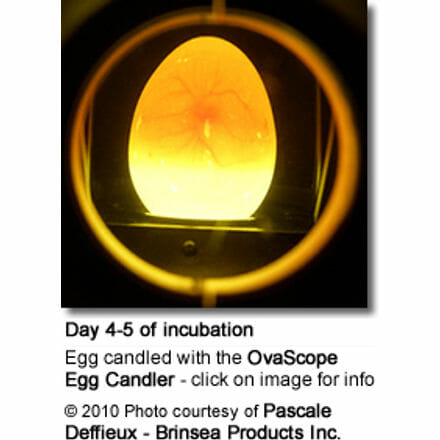 Causes … Signs of Deficiency in the Embryo Nutrient

Unsuccessful hatches can be caused by infertile eggs or embryo mortality. Each of these conditions can be diagnosed by Candling Eggs. (Please also consider this alternative method to check for embryo mortality.) It is important to examine eggs that do not hatch to estimate whether infertility or embryo death is the basis for hatch failure.

No chicks hatched / chick death at late stage of development

Considerably incorrect incubator settings either through malfunction or incorrect settings – hatching temperature and humidity should be different from the incubation temperature and humidity. The change should be made anywhere from a week to three days prior to the expected hatch date (basic incubators need to manually adjusted, while the more sophisticated models can be set to make changes automatically).

Temperature: One temperature spike is unlikely to kill a developing chick. It takes more than a few minutes at a higher temperature than normal before a chick is killed. If you had other eggs in the incubator that hatched with the egg that didn’t, this problem can probably be ruled out (although some basic incubators may have “hot spots” or “cool spots” — depending on air circulation inside the incubator.

Egg Turning: During the incubation period, eggs need to be turned several times a day. However, the last 3 days before hatching, the chick is fully formed and, at this stage, is in the process of absorbing egg yolk into the abdomen (for nutrition). If the handler continues to turn the egg at this stage, the yolk sac can become twisted potentially preventing absorption of the yolk and starvation or at least weakening of the chick. Also, breaking out will be more difficult if the yolk contents have not been absorbed.

Calcium Surplus: Too much calcium in the mother hen’s diet can result in thick-shelled egg shells, which will prevent chicks from hatching. Generally one can tell if there is too much calcium, if the egg shell isn’t smooth. One can see irregular bumps on the surface.

Over handling of the eggs: Skin oils prevent oxygen from getting into the egg resulting in suffocation of the chick, as the oil blocks the pores. One way to tell if this is the problem is if the surface of the eggs looks glossy.

Depending on the degree of malnutrition, either death or physical symptoms will occur. Please refer to the below:

Vitamin A: Death at about 48 hours of incubation from failure to develop the circulatory system; abnormalities of kidneys, eyes and skeleton

Vitamin D: Death at about 18 or 19 days of incubation, with malpositions, soft bones, and with a defectiveupper beak prominent.

Vitamin E: Early death at about 84 to 96 hours of incubation, with hemorrhaging and circulatory failure(implicated with selenium).

Thiamin: High embryonic mortality during emergence but no obvious symptoms other than polyneuritis inthose that survive.

Pyridoxine: Early embryonic mortality based on antivitamin use.

Folic acid: Mortality at about 20 days of incubation. The dead generally appear normal, but many havebent tibiotarsus (long leg bone), syndactyly (fused toes) and beak malformations. In poults, mortality at 26 days to 28days of incubation with abnormalities of extremities and circulatory system.

Vitamin B12 : Mortality at about 20 days of incubation, with atrophy of legs, edema, hemorrhaging, fattyorgans, and head between thighs malposition.

Zinc: Deaths prior to emergence, and the appearance of rumplessness, depletion of vertebral column,eyes underdeveloped and limbs missing.

Kate Ison offers an “easier and less intrusive way to find out if the embryo in a cold and neglected egg is dead or alive:”

To find out if the embryo in a cold and neglected egg is dead or alive:

IMPORTANT: Warm the egg to brooder temperature first. As long as you are sure the egg hasn’t pipped externally (if it has just pipped internally it wont harm it). Gently place the egg in a small but deep bowl of water at 100 F for up to 20 seconds.

Note: Any significant temperature change the egg is exposed to is likely to hurt the developing chick. Therefore, the temperature of the water is very important!

If the embryo is still alive the egg will bob up and down and generally wobble around, take it out and dry it on a tissue or the chick could become chilled, put it back in the brooder. It will not harm the chick and may in some cases help a chick in trouble to eventually get out.

It causes no shock to an embryo and presents no danger of the chick bleeding to death or becoming dehydrated or infected as it sits in an open egg waiting for the blood vessels to recede.