The Fischer’s lovebird (Agapornis fischeri, synonym Agapornis personata fischeri) is a species of bird in the parrot family.

They are named after German explorer Gustav Fischer.

They are native to a small area of east-central Africa, south and southeast of Lake Victoria on the inland plateaus of northern Tanzania. In drought years, some birds move west into Rwanda and Burundi seeking moister conditions.

In captivity, they are easy to keep and breed freely. They can be bred in large colonies. They were originally discovered in the late 1800’s, and were first bred in the United States in 1926. 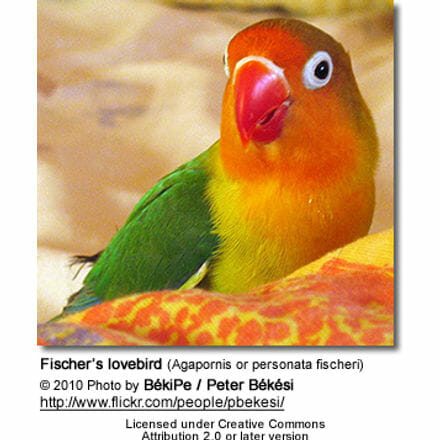 Fischer’s lovebirds have green backs, chests, and wings, their necks are a golden yellow and as it progresses upward it becomes darker orange. The top of the head is olive green, and the beak is bright red.

The upper surface of the tail has some purple or blue feathers. A. fischeri has a white circle around its eyes.

Young birds are very similar to the adults, except for the fact that they are duller and the base of their beak has brown markings.

Hybrids between Fischer’s Lovebirds and Masked Lovebirds are also quote common in captivity and have also occurred in feral populations. They are reddish-brown on the head and orange on the upper chest, but otherwise resemble the Masked Lovebird. 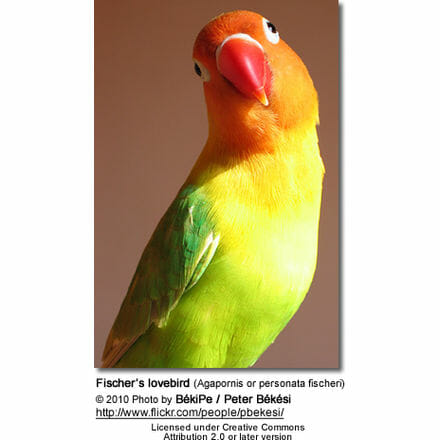 The Fischer’s Lovebird are very handsome, and as playful and energetic as the popular Peachface lovebirds.

I only had a few Fischer’s lovebirds and they were not as friendly as my Peachfaces — however, other breeders have produced very friendly Fischers Lovebirds – genetic traits are also involved in shaping a bird’s personality.

There are many Fischer’s lovebird enthusiasts who report that their lovebird is the most loving around. When considering one as a pet, the level of socialization and suitability can in many cases be assessed by observing a lovebird.

Is it scared, skittish, aggressive? Scared lovebirds can sometimes be socialized and turned into good pets. Skittish lovebirds take more time and effort and some may never make good pets.

Aggression obviously is not a good sign to start with — however, one has to understand that any parrot will bite if he isn’t bonded with you and doesn’t appreciate your handling it or is even scared of you.

Understanding a bird’s body language is a good way to avoid being bitten.

Last but not least, any parrot needs time to bond with you before it is as tame as say the little lovebird featured below that enjoys an affectionate moment with its owner.

Compared to other, larger parrots, Fischers Lovebirds are relatively quiet, easy to house and maintain. Lovebirds are not known for talking ability and the Fischers are no exception.

Those who love the Fischer’s Lovebird enjoy its clowny personality, its boundless energy and playful nature.

If they are properly cared for, their lifespan ranges from 15 to 20 years. However, some individuals lived 30 years. 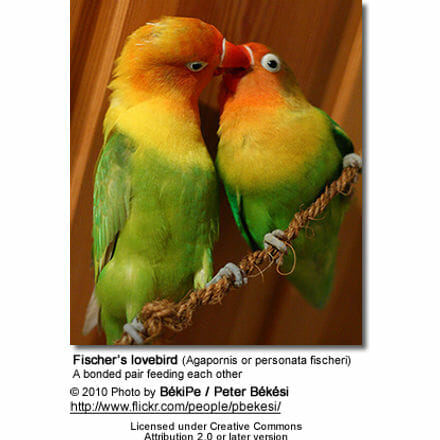 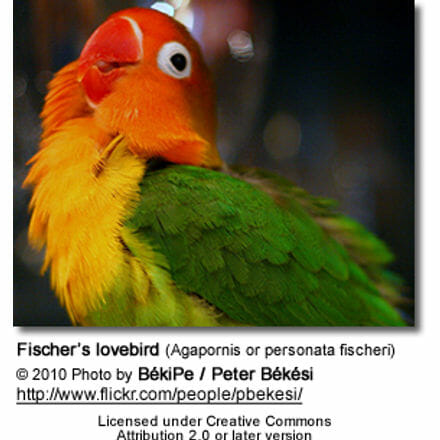 Training and behavioral guidance is recommended 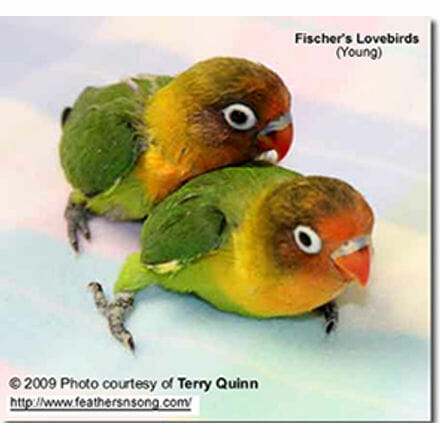 If you are considering a lovebird as a pet, the following web resources might be of interest 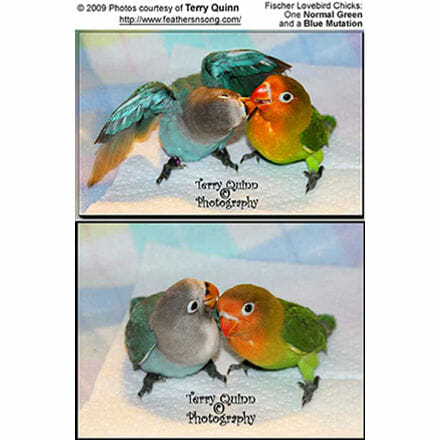 The females build the nests and lay three to six eggs. She incubates them for about twenty-three days to hatching. The hatchlings will be cared for by her until they leave the nest at about six weeks of age. The father then takes over the feeding of the fledglings for another two weeks or so until they are completely weaned.

Lovebirds should be fed a quality seed mix, in addition to providing them with vegetables and fruits. It is recommended to supplement their diet with vitamins and minerals. Bird-specific vitamins are available at the vets or better pet stores.