The Green-naped Lory is the most common of the Rainbow Lories.

It occurs naturally in northern and eastern parts of Australia, as well as on islands north and east of Australia. They can also be found in Indonesia, Papua New Guinea, Solomon Islands, New Zealand, and New Caledonia, where they inhabit rainforests, open forests, woodlands and mangroves.

These social parrots are usually seen in flocks.

They average 26 cm or 11 inches in length (including tail) and weigh approximately 133 g or 5 ounces.

The color of the head is mostly a deep blue. The lower throat and the breast are bright red with a heavy publish-black barring. The abdomen is green. 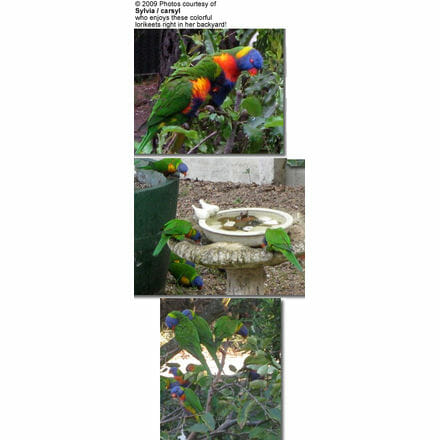 They can be good pets, but some individuals become nippy, especially at sexual maturity. They are not very noisy and can learn to speak fairly well.

Because of their dietary requirements that consists mainly of fruit and nectar, they are messy birds and difficult to maintain indoors unless special arrangements are made to create an indoor environment that is easy to clean and disinfect.

These lories are fairly easy to breed. However, they cannot be visually sexed, so surgical or DNA sexing is recommended. The average clutch size is 3-4 eggs that are incubatored for 24-25 days. The young fledge when they are about 10 weeks old.

Their life span is 15 but up to 32 years. The wide range can only be explained by inconsistencies in meeting dietary requirements of this species. They are mature at the age of 1 – 2.5 years.

The lorikeet’s main diet consists of nectar and fruit. They also eat greens, buds, unripe grain, pollen and some seeds.

Formulated diets can be purchased at most pet stores in either a wet form as a nectar or in a dry form as a powder. If you choose the powder, do make sure to have water near the powder, so that the lory can take drinks while eating. Fresh fruit or unsweetened canned fruit should also be fed regularly.

Lisa Jacobson – Jake’s owner – describes Jake as follows: “Jake was my best friend, two of us had so much fun. I think I learned more from him than he learned from me in the short time we had together. He used to ask everyone that came over if the wanted to take a bath and if they ignored them he would ask again louder and start out with ‘What the Hell, wanna take a bath’?”

Jake RIP – Sadly, Another beautiful companion bird has crossed the rainbow bridge … Jake was killed by a dog who got into the house. Jake was born with a defective wing and couldn’t fly away. He is missed more than words can express.