The Red Lory aka Moluccan Lory (Eos bornea bornea aka Eos rubra bornea) is endemic to the Ambon, Saparua, Buru, Seram, Goram, Seramlaut, Indonesia, Watubela and the Kai Islands (also known as Kei Islands) – found in the south-eastern part of the Maluku Islands in Indonesia.

The Black-winged or the Blue-streaked Lories are also sometimes referred to as Red Lory.

There are four sub-species of the Red Lory:

Lories are popular companion birds due to their intelligence, entertaining personality and stunning beauty. They are also quite easily bred, so there are readily available. Their expected lifespan is 28+ years.

They reach maturity at 8 months or later. Males and females look alike and breeders depend on DNA or endoscopic sexing to determine sex.

They are affectionate, curious, extroverted and clowny and exhibit some unique behaviors. Some like to wrap themselves up in a blanket 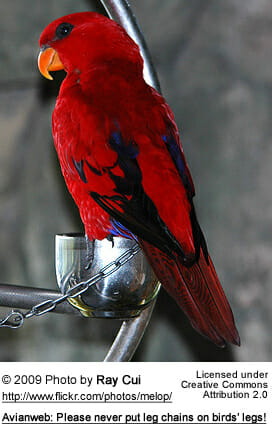 for sleeping. At times, they can even be seen sleeping on their backs.

They are capable of aggressive behavior if their territory and possessions are not respected. They are demanding in care requirements (especially diet preparations) and require a lot of attention. Daily baths or showers should be part of their grooming regimen.

They are trainable and, with a little patience and know-how, can be trained to eliminate in a certain area on cue. This webpage will provide you with instructions.

Their voice ranges from loud, piercing whistles and metallic “pings” to soft, high-pitched warbles and chattering.

One of the most commonly kept pet lories and one of the easiest to breed. A favorite with many, as are most of the red colored lories.

This is an excellent talker. Some having whole sentences in their vocabulary. Unfortunately, their lory voice is at times quite loud, with a high pitched screech. Most stay tame, even in maturity. They can be prolific breeders and are quite easy to find as hand-reared pets. (Description by Dick Schroeder – Owner of Cuttlebone Plus and Expert Breeder / Keeper of Lories).

“I will also say that this bird had an incredible vocabulary; I quit counting at 300 words. She used them correctly and in phases and short sentences.” 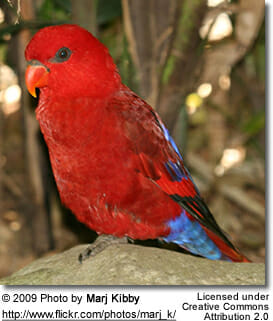 “I had a few friends that were not big bird enthusiasts… this bird seemed to know it and would go out of her way to make “sneak attacks” on them. She would sneak up and pounce, and seemed to enjoy the excitement of them freaking out and yelling. One time, while she was trying a sneak attack, my friend saw the birds reflection in a mirror and reach over to stop her. The bird ended up slipping off the back of the couch, and was then between the couch and the wall. From there I hear “Damn it, Damn it, come here right now”. I nearly laughed till I cried.”

Red Lories in the Wild:

In their natural habitat, red lories feed on nectar, pollen, fruits, and the occasional insect.

All lories have a tongue that is specially adapted with a brush-like tip composed of elongated papillae. This feature enables the birds to collect pollen from flowers and compress it into a form suitable for swallowing.

They play a major role in the pollinating or trees and flowering plants.

Distribution: Kai Islands (also known as Kei Islands) – found in the south-eastern part of the Maluku Islands in Indonesia (please refer to above distribution map). 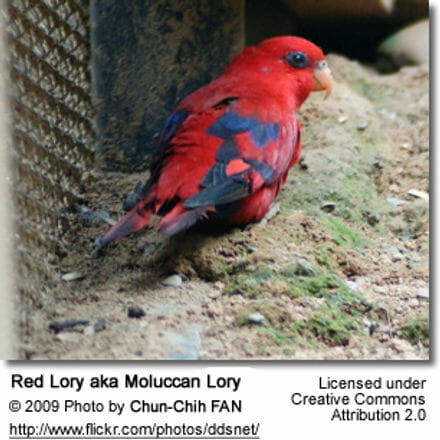 Distribution: Buru Island in the province of Maluku (please refer to above distribution map)

Distribution: Seram (formerly Ceram) in the province of Maluku – please refer to above distribution map.