In the wild, the Moluccan Cockatoo inhabits lowland forest below ~3,300 feet (~ 1000 m), where they can be seen foraging on seeds, nuts, fruit and coconuts.

A Moluccan Cockatoo’s beak is capable of exerting 500 pounds of pressure, allowing it to crack even the hardest nuts.

The moluccan cockatoo is endangered in its natural habitat and is a protected species, as such this cockatoo is listed on appendix 1 of CITES since 1989, which makes trade in wild-caught birds illegal. The number of Moluccans in the wild has declined because of habitat loss and illegal trapping for the cage-bird trade.

At 20 inches (50 cm), this is the largest of the white cockatoos, with the female generally being larger than the males. They weigh between 640 and 1025 grams – the average being 850 grams.

This cockatoo has white-pink feathers with a definite peachy glow (and a slight yellow on the under wing), and a large retractable recumbent crest. The Umbrella Cockatoos and the Moluccan Cockatoos have the largest and fullest crests.

There are some pale yellow / lemon colored feathers on the underside of the wings, which flash when they fly.

The males have dark brown / black eyes. Mature females have brown to burgundy red eyes. A small flashlight may be helpful when assessing the eye color.

It also has a loud voice, and in captivity is a capable mimic.

Moluccan cockatoos only breed once a year – usually between December and March, when vegetation growth is at its peak and food is readily available.

Once a male was successful in attracting a female, the pair will be seen preening each other’s heads and scratching each other around the tails. These signs of affection serve to strengthen their pair bond. Eventually, the male will mount the female to perform the actual act of mating by joining of the cloacae.

This act takes longer in new pairs and are much shorter in bonded pairs. In fact, in some instances, the female may even approach the male.

Pairs separate from their group to settle down in or near their nesting area, which is usually a cavity in a tree.

Nesting and Raising of the Young 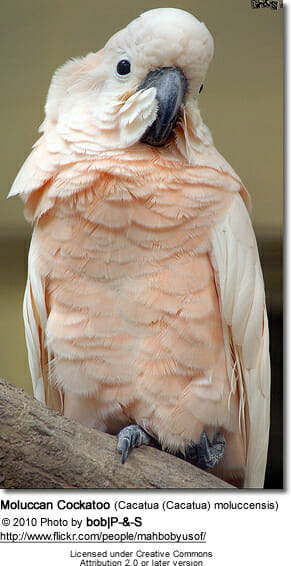 In their natural habitat, moluccan cockatoos typically feed on various seeds, nuts and fruits, such as papaya, durian, langsat and rambutan. As they are also feed on corn growing in fields, they do considerable damage and are, therefore, considered crop pests by farmers. (BirdLife International, 2001)

This intelligent and complex parrot is emotionally very needy and not a bird for the faint hearted. They tend to form close bonds with one person and may attack others in the household if they are not properly trained. They can develop severe emotional problems when separated from their mate (human or otherwise).

This all being said, this is an absolutely wonderful pet for the right person who enjoys spending a lot of time with their pet and is willing to provide this training with the love and attention it deserves. Many people own Moluccans who have no behavioral problems at all, and yet the list of Moluccans with behavioral problems may just be as long.

A well-adjusted and trained Moluccan is sweet and cuddly and totally devoted to their owner. If their special needs are not met, they may scream incessantly. Males tend to develop aggressive tendencies as they get older that need to be curtailed through continuous training.

The Moluccan Cockatoo is obviously not a good choice for inexperienced parrot owner. The perfect Moluccan owner should have a gentle, yet disciplined disposition, who appreciates these special parrots for the special beings they are.

While working at a rescue organization, I met one such special cockatoo. He was extremely noisy, incredibly affectionate — you could basically cuddle with him all day long — and he was a real performer.

Indeed a prize winner at American’s Funniest Videos. He loved to dance and put on quite a show.

Sadly, he is very plucked and the situation he is in right now is desperately sad.

The realization that acquiring such a creature without first considering your personality and the personality of your family, and all the ramifications for your lifestyle and changes necessary to accommodate this new pet can have devastating results for any moluccan brought into this situation.

Cockatoo owners need lots of time on their hand to spend with their pets. It really is difficult for working people to be able to accommodate this needy pet, unless they have a well-furnished bird room (instead of a cage), preferably with a fun outside retreat and several hours to spend with this pet after work.

Even better if it is bonded with other family members who are willing to spend time with this precious cockatoo.

This cockatoo will never outgrow his or her great need for affection and they have immeasurable amounts of love to give. He will entertain you for hours with his antics and technical skills that enable him to eventually figure out how to get around most locks (be sure to padlock his cage).

This cockatoo is very intelligent and this mind should be nurtured by providing plenty of mental stimuli and training.

Thousands of these beautiful parrots end up discarded in rescue organizations that cannot possibly provide them with the special attention they so crave. Many develop severe behavioral problems, including excessive screaming and extreme feather plucking even self-mutilation.

Once that final stage of self-mutilation has been reached, vets often suggest euthanasia to stop further injuries and suffering 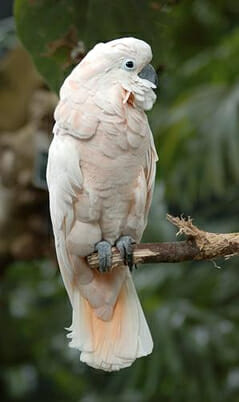