The Painted Conure (Pyrrhura picta) – also known as the Painted Parakeet – is endemic to northern South America (north of the Amazon River); specifically the Guianas, and most regions of the Amazon Basin – except the northwest Basin in Bolivia, Brazil, Colombia, Ecuador, French Guiana, Guyana, Peru, Suriname, and Venezuela. They also occur in locales of Panama in Central America.

Outside the breeding season, groups of 5 to 12 birds or more birds may congregate in favored feeding areas. Bonded pairs tend to stay close. Mixed feeding groups with Golden-winged Parakeet (Brotogeris chrysopterus) and Pearly Conure (Pyrrhura perlata) also occur. They regularly visit water places to drink and bathe as well as feed on mineral-rich soil of clay-banks and barreiros in rain forest.

This species prefers dense and tall trees and tends to move around a lot. They are conspicuous through their loud calls, but are difficult to detect in the foliage because of their camouflaging plumage.

The breeding season in Panama and Colombia stretches from March to June; in Surinam from February to April; and in Brazil and Bolivia from July to December. In the United States, they may breed from February to March through June / July (depending on climate).

They nests in the cavities of dead and living trees – often at considerable height.

During flight a brief eek. Their contact call is a loud peeah and when perching they make harsh kleek-kleek calls.

It has a mostly green plumage. The feathers on the chest are dark with broad whitish-grey tips, resulting in a distinctly scaled effect. The crown and nape  (lower back of the neck) are dark brown, strongly suffused with blue on the forecrown. The lores (the regions between the eyes and bill on the side of a bird’s head) and upper cheeks are reddish-brown.

The feathers covering the ears are buff-white. They have a reddish-brown patch on the center of the abdomen and a brownish-red patch extending from the lower back to the upper tail-coverts (feathers).

The primary wing feathers and outer webs of primaries (longest wing feathers) are blue. The tail above is brownish-red turning green towards base. The beak is brownish-grey, the irises generally brown and the legs are greyish.

Both males and females look alike, and they reach maturity when they are about two years old.

Their flight is described as swift and direct. 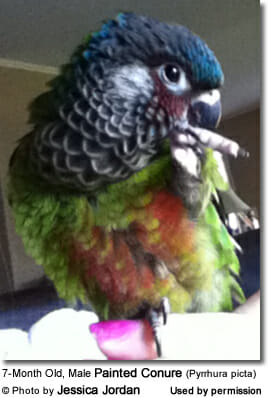 Adults of all picta subspecies – except for Jaraquiel Conures or Sinú Parakeet (P. subandina) and some Azuero Conures (P. eisenmanni) – have red to the leading edge of the wing, but this is often difficult to see (particularly when perched).

Depending on the subspecies, the face and cheeks are dusky-maroon to maroon-red (sometimes with a bit of blue on the lowermost part), except in Jaraquiel Conures or Sinú Parakeet (P. subandina) where the cheeks are bluish-green.

The irises are generally reported as being brown or dark, but at least Magdalena Conures or Todd’s/Perijá Parakeets (P. caeruleiceps) can have light cream irises.

This small parrot is quieter than other conures and well-socialized Painted Conures can be very sweet-natured. It is rarely seen in captivity and is very much in demand not only because of their endearing disposition but also because of their beautiful coloring.

Painted Conures have lots of energy and love to play. A roomy cage to accommodate lots of toys and natural branches should be provided to this active conure. Neglected or bored Painted Conures are inclined to feather plucking.

These are active conures that are not too noisy, unless they get alarmed or excited. They enjoy bathing and chewing fresh branches.

Their natural diet consists of fruits (including berries), flowers, seeds, vegetable matter as well as insects and their larvae. They occasionally feed on algae on the surface of ponds.

Captive diet: They should be offered plenty of fresh fruits, vegetables and greenfood. Offer a regular supply of branches with flowers and buds for added nutrition and to satisfy their urge to chew. A good quality seed mix with safflower seeds, oats, some sunflower seeds, hemp, buckwheat, millet, canary grass seed and rowanberries should be available at all times. Sprouted seeds should be offered daily, as well as millet spray several times a week. Provide vitamins and mineral supplements, as needed.

Painted Conures are somewhat challenging to breed and are, therefore, not recommended for inexperienced breeders. While some pairs breed readily, others show no interest at all.

Newly imported birds are shy and nervous and may never become confiding with their caretakers. Although well-socialized captive-bred birds tend to be friendly and inquisitive. They are susceptible during the acclimatization period, but generally hardy once acclimatized.

Outside the breeding season, a colony system in large flight is possible with same species or other Pyrrhura Conures. It is, however, best to isolate pairs for breeding as they can disturb each other or even be aggressive towards other birds in the flight during this time.

The average clutch is anywhere from 4 to 9 eggs, and a good part of them tend to be infertile. Both parents share in the incubation duties, which will last 21 – 23 days. When not incubating, the male usually sits on or near the nesting box. The young fledge when they are about 50 days old.

Young are mature and able to breed when they are about 2 years old. One breeding a year is the norm, occasionally two breedings are possible, particularly if the first clutch is pulled early for handrearing.

If possible, offer the breeding birds a choice of sizes and types of logs or nest-boxes placed in various locations within the aviary. Once a pair has identified a favorite, keep the box for them specichosen a specific nest-box/log and been successful in it, offer that one for their exclusive use.

All spare boxes can at this point be removed. However, before moving them to another flight, ensure the log / nest-box is cleaned to ensure the receptacle has the minimal contamination of mites, parasites and pathogens.

Conures have a habit of removing all the nest box material and laying their eggs on the bare wooden base.

Nest inspections are generally not tolerated.  If nest inspection is necessary, wait until both parents have left the nest.  They can be aggressive and protective of the nest area when breeding.

The taxonomy of the Painted Conure has recently undergone significant changes:

Following a review in 2002, it was recommended to treat these separate species. In 2006, a study based on maternal lineage test (mtDNA) confirmed that the “traditional” Painted Parakeet was polyphyletic (derived from more than one ancestral type), as P. p. picta was closer to the taxon emma (traditionally considered a subspecies of the White-eared Parakeet, P. leucotis) than it was to amazonum and roseifrons.

The taxon lucianii was not sampled, but based on plumage and biogeography it likely falls between P. amazonum and P. roseifrons. In 2002 it had also been recommended treating the Azuero Conure (P. eisenmanni), Jaraquiel Conures or Sinú Parakeet (P. subandina) and Magdalena Conures or Todd’s/Perijá Parakeets (P. caeruleiceps) as separate species.

Of these, only Azuero Conure (P. eisenmanni) was sampled in 2006, where it was found to be relatively close to P. p. picta, and arguably should be retained as a subspecies of the Painted Parakeet. Based on plumage and biogeography, Magdalena Conures or Todd’s/Perijá Parakeets (P. caeruleiceps) and Jaraquiel Conures or Sinú Parakeet (P. subandina) are likely also part of this group.

Note: The possibility that some of the above are separate biological species cannot be discounted at present.

The Hellmayr’s Conure (Pyrrhura amazonum), also known as the Santarém Conure, has typically been considered a subspecies of the Painted Parakeet. Ribas et al. (2006) confirmed by maternal lineage test (mtDNA) that P. amazonum should be considered a species separate from P. picta. The American Ornithologists’ Union voted to recognize P. amazonum as a species with Madeira Parakeet (P. amazonum snethlageae) as a subspecies.

The Pantchenko’s Conure (pantchenkoi) have often been considered a valid subspecies or rarely even a separate species, but recent opinion is that it is a synonym of Magdalena Conures or Todd’s/Perijá Parakeets (P. caeruleiceps).

Distribution: This conure is endemic to western part of Azuero Peninsular, in Panama.

Description: The Azuero Conure averages 22 cm or 8.5 inches in length (including its long tail). It looks similar to the Painted Conure featured on this page, except it has a narrow band to the forehead. It has a longer tail than the nominate Painted Conure and the beak is more powerful. The lores (the region between the eye and bill on the side of a bird’s head) and the areas under the eyes are red, turning reddish-brown on the cheeks. The crown is dark brown with a faint bluish tinge. The sides of the neck, throat and upper breast are dusky brownish-blue with broad brownish-white edging, but without the typical well-defined scalloped appearance of other subspecies. The bend of the wing is green.

Distribution: This conure is endemic to the Sierra de Quimarí and Sierra de Murrucucú in northwestern Colombia; possibly also adjoining lower Cauca and Magdalena areas. It already disappeared from the lower Sinú Valley.

Despite surveys aimed at finding the Jaraquiel Conures or Sinú Parakeet (P. subandina), there are no recent records of this species, and it may already be extinct.

Description: This conure averages 22 cm (8.5 ins) in length (including its long tail) and its wings are 111 – 124 mm or 4.4 – 4.9 inches long. It looks like the nominate Painted Conure (featured on this page), but it has a narrow band to the forehead and the lores (the region between the eye and bill on the side of a bird’s head) and area under the eyes are brownish-red. The cheeks are bluish-green and the crown is dark brown with a slight blue tinge to the frontal area. The feathers covering the ears are yellowish-brown. The sides of the neck, throat and upper breast are dusky brownish-blue, with a broad pale grey-brownish edging. The bend of the wing is green.

It has a restricted distributions within those regions as a result of extensive habitat destruction. This species may also be threatened by capturing for the pet trade. Living specimens of this sub-species were only recently photographed for the first time, and it has been estimated that its population may be as low as 30-50 individuals.

Description: They average 22 cm or 8.5 inches in length (including its long tail), with a wing length of 119 – 126 mm (4.7 – 5 ins). They look like the nominate species (picta) featured above, except the forehead, lores (the region between the eye and bill on the side of a bird’s head) and the areas under the eyes are red turning reddish-brown on the upper cheeks. The crown is blue and the sides of neck, throat and upper breast are dusky brownish-blue, with a broad pale grey-brownish edging.

The Pantchenko’s Conure (pantchenkoi) has traditionally been considered a valid subspecies of the Painted Conure or, on occasion, even a separate species, but recent opinion is that it is a synonym of the Magdalena Conures or Todd’s/Perijá Parakeets (P. caeruleiceps).

Distribution / Range: This conure’s natural habitat are the upper areas of Perijá Mountains along the border between Colombia and Venezuela.

Description: The Pantchenko’s Conure averages 22 cm or 8.5 inches in length (including its long tail). It looks like the Painted Conure featured above, except the forehead, lores (the region between the eye and bill on the side of a bird’s head) and the areas around the eyes are red turning reddish-brown on the upper cheeks. The crown is greyish-brown tinged bluish. The sides of the neck, throat and upper breast are smoky-grey with a broad pale grey-brownish edging, which is not well defined. The periophthalmic (eye) ring is partly feathered.