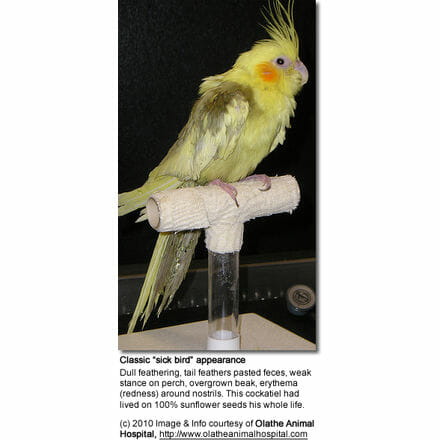 Half of the time caused by a bacterial / Megabacteriosis or viral pathogen. If it’s bacterial, an antibiotic may have to be administered. Please refer to this webpage for information.

Can also be a result from breathing irritating fumes, such as those of tobacco smoke, teflon exposure, or polluted air. Please refer to toxicities.

Aspergillosis: Can affect just about any parrot. Respiratory symptoms, dfficulty breathing, rapid breathing and/or exercise intolerance are common If any portion of the central nervous system has become involved, the bird may have tremors, an uneven or wobbly gait, seizures, or paralysis.

Airsack Mites: Common in: Finches (especially Gouldians) and canaries; but have also been diagnosed in other birds.

Infectious laryngotracheitis (ILT) – Affects fowls, pheasants and turkeys. Water fowl, such as ducks and geese, show no signs, but ducks are known to carry ILT – Common symptoms: contagious respiratory disease which is characterised by gasping, neck extension and conjunctivitis (inflammation of the membrane around the eye).

Newcastle Disease: Respiratory distress, and rasping followed in 1 or 2 days by a paralysis of legs and wings and bad down between legs or straight back over shoulders, twisting of neck (stargazing). In adult birds, loss of production along with some respiratory distress and paralysis after 4 to 6 days.

Overheating / Heat Exposure / Life-threatening Emergency (immediately move bird to a cool area and provide water). Common / possible symptoms: Open-mouthed breathing, panting, holding their wings away from their body, in an attempt to cool itself down behaving as if they are stressed

Wheezing and Difficulty Breathing – caused by inhaled dust or seeds. Occasionally odd objects get stuck up its nostrils (i.e., seeds / millets). Check and, if applicable, remove any objects that may obstruct your bird’s airways.

Pionus Parrots may wheeze or make snorting sound when excited or frightened, which may be mistaken for a sign of respiratory distress.

Gallid herpesvirus – Infectious Laryngotracheitis – A disease of chickens and pheasants