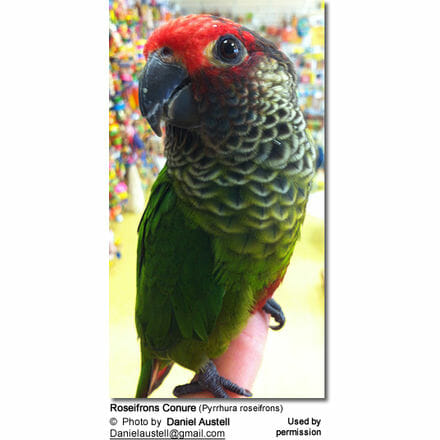 The Red-fronted Conure is native to the western Amazon basin in eastern Peru, far south-eastern Ecuador, north-western Bolivia and northwest Brazil, where it occurs in tropical humid lowland forest and adjacent habitats. The Red or Rose-fronted Conures were imported into the U.S. in the 1990s by two consortiums.

These social conures are typically seen in pairs or groups. They feed on various fruits, seeds and flowers; and typically nest in tree cavities.

This conure is fairly common in most of its range and occurs in several protected areas, for example the Manú National Park. 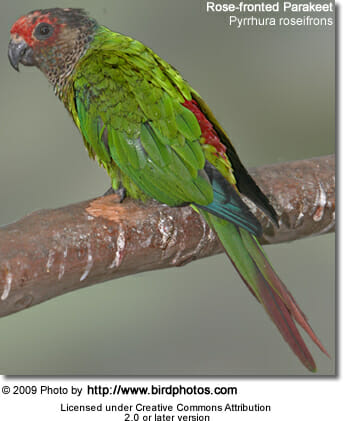 The plumage is mainly green with a dark red belly, rump and tail tip. The tail is all dark red from below. It has a grey-scaled chest, a whitish or dull yellow patch on the auriculars (feathers covering the ears) and bluish remiges (flight feathers – typically only visible in flight). All races have dark grey legs.

These beautiful little parrots are still very rare, but their pet potential is excellent. They are not as nippy as other conure species, although they tend to be “mouthy.” These conures are active, playful, inquisitive and generally friendly. 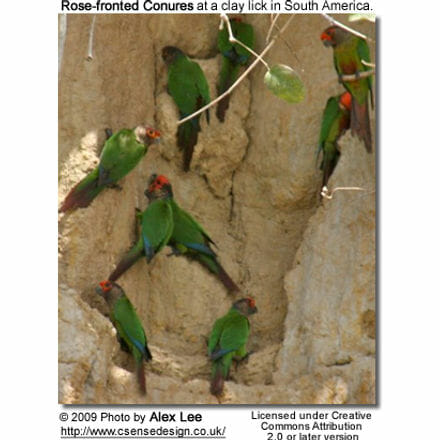 These distinctive conures are generally not difficult to breed. The trick is to figure out what they like to nest in. Usually, their preferences were shaped by the shape or type of nest box or log they themselves hatched and were raised in. If this not known, offering a variety of nest boxes / logs makes sense – this way they can choose what they feel comfortable with. Once their choice has been made, the other nest boxes / logs can be taken out, cleaned and used elsewhere. Once a pair has chosen its log or nest-box, the other ones can generally be removed.

The red-fronted conure has typically been considered a subspecies of the Painted Conure (P. picta); however, Joseph (2002) discovered that an undescribed population existed in northern Peru (and later another population was found in far south-eastern Ecuador). The peruvian population was described as Pyrrhura peruviana (Hocking, Blake and Joseph, 2002).