The Sulphur-crested Cockatoos, Cacatua galerita, are noisy and conspicuous parrots and in the wild are wary and difficult to approach. They have adapted very well to European settlement in Australia and live in many urban areas.

They are one of the larger and more widespread of Australia’s cockatoos. In fact, in Australia they can be so numerous that they considered pests as they can be destructive to cereal and fruit crops, as well as timber structures such as house planking and trees. Some even resort to shooting or poisoning them.

However, a government permit is required, as they are a protected species under the Australian Commonwealth Law.

These parrots are naturally curious, as well as very intelligent. A 2009 study involving the sub-species Eleonora Cockatoo found that Sulphur-crested Cockatoos are capable of synchronizing movements to a musical beat. 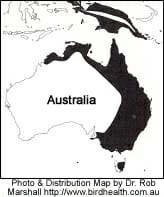 The Sulphur-crested Cockatoo is a common inhabitant of open woodland and forest areas along the east coast of Australia, extending along the northern coast and across the seas into Papua New Guinea.

These birds range throughout the various climates in Australia, from Far North Queensland beyond the Iron Range Mountains, as well as parts of the Snowy Mountains. They are also numerous in Adelaide and Southern South Australia. The nominate Sulphur-crested Cockatoos have been introduced to Perth, which is far outside their natural range.

They have also been recorded from various islands in Wallacea (such as Kai Islands and Ambon). 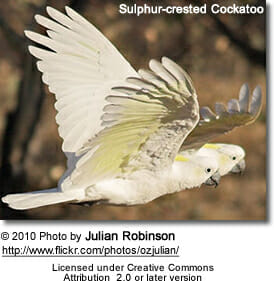 The Sulphur-crested Cockatoo is similar in appearance to the three species of corella found in Australia. Corellas are smaller, however, and lack the prominent yellow crest, there are a few regional subspecies within Australia.

There are some pale yellow / lemon colored feathers on the underside of the wings, which flash when they fly.

The males have dark brown / black eyes. Mature females have reddish brown to burgundy red eyes. They reach maturity when they are about 3 years old. A small flashlight may be helpful when assessing the eye color.

Vocalizations: It also has a loud voice, and in captivity is a capable mimic. Their loud calls are meant to travel through the forest environments in which they live, including tropical and subtropical rainforests.

These birds are naturally curious creatures, as well as very intelligent.

These parrots produce a very fine powder to waterproof themselves instead of oil as many other creatures do.

These birds are very long-lived, and can live upwards of 70 years in captivity, although they only live to about 20–40 years in the wild.

Sulphur-crested Cockatoos, along with many other parrots, are susceptible to a widespread viral disease known as Psittacine Beak and Feather Disease, which causes the birds to lose their feathers and grow grotesquely shaped beaks.

Cockatoos only breed once a year – usually between December and March, when vegetation growth is at its peak and food is readily available.

Once a male is accepted by the femael, they will be observed preening each other’s heads and scratching each other around the tail. This serves to strengthen their pair bond.

Eventually, the male will mount the female and perform the actual act of mating by joining of the cloacae. Generally, this ritual is much shorter for bonded pairs, and the female may even approach the male.

When the time comes to nest, pairs leave their group and search for a suitable nesting site – which is usually a tree cavity.

In their natural habitat, cockatoos typically feed on various seeds, nuts and fruits, such as papaya, durian, langsat and rambutan. As they are also feed on corn growing in fields, they do considerable damage and are, therefore, considered crop pests by farmers. (BirdLife International, 2001) 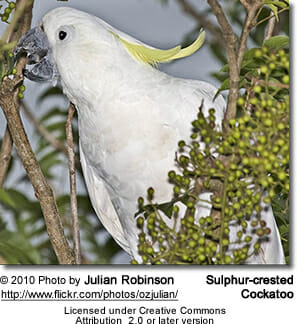 Their distinctive raucous call can be very loud.

These parrots have been known to engage in geophagy, the process of eating clay to detoxify their food.

The nest is a bed of woodchips in a hollow in a tree. Like many other parrots it competes with others of its species and with other species on nesting sites.

Two to three eggs are laid and incubation lasts between 25-27 days.

Both parents incubate the eggs and raise the nestlings.

The nestling period is between 9 to 12 weeks, and the young fledgelings remain with their parents for a number of months after fledging.

These beautiful parrots are frequently sought as companion birds, but as they are demanding pets, they require a devoted owner and continuing obedience training from a young age.

Talking: Katie from Texarkana, Texas wrote: “I have a 34 yr old male Fitzroy Greater Sulphur Crested cockatoo that is a fair talker. He doesn’t talk as well as the blue front amazon, but he does have a vocabulary. He mimics more than anything: the dog, the car, my laugh, the phone.”

Please refer to the photos and information above.