The Whiskered Lorikeets or Arfak Alpine Lorikeets are endangered in their natural habitat (CITES II) and can be found in the mountains of Vogelkop peninsula in Western New Guinea.

There are three known subspecies

These shy and quiet, yet energetic lorikeets are susceptible to stress and disease and require careful acclimatization. Once they have had time to get used to a climate and environment, they are much hardier. They also become more confiding with their caretaker after a while. They do well in a colony system with members of their species provided they are in a spacious accommodation.

At this point in time, they are very rare and expensive to acquire. As they are so rare and endangered, these lories should preferably be placed into a well-managed breeding program with experienced caretakers. They should be provided alarge aviary of the following dimensions or larger: 6.5 to 7 x 3 x 6.5 ft (2 x 1 x 2 meters), with a roosting box. The temperature in their area should not go below 68 F (20 Celsius). A heated shelter is recommended in areas where temperatures dip below that. The nesting / roosting box should be about 6 x 6 x 15 inches (15 x 15 x 40 cm). 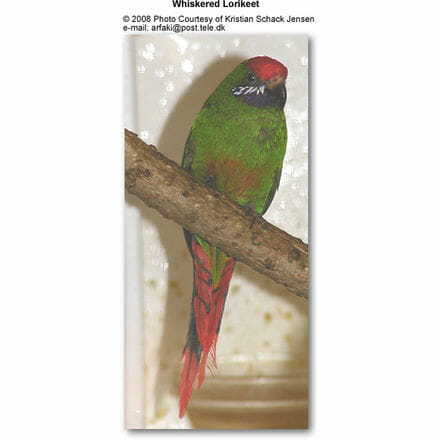 Description: The Greater Alpine Lorikeet is a little bit larger than the Whiskered Lorikeet / nominate form featured above. It is approximately 6.7 inches (17 cm) long and the tail tip if red, while the tail of the nominate form is tipped with pink.

Distribution: Found in the mountains of Southeast New Guinea west to Huon peninsula and Sepik Region.

Description: Looks like the Whiskered Lorikeet / nominate species, except the abdomen and lower flanks are green.