The brotogeris species are endemic to Central and South America.

The word “Brotogeris” means “having the voice of a human.” In the language of their native countries, which is mostly Spanish, they are called “pericos” – the translation of which is “parakeet.”

Their average life span is 15 years; although some have been reported to have lived up to 35 years (tui parakeets, specifically).

Members of the Brotogeris are swift fliers. They are smaller than cockatiels, with an average length of 7-9″ from head to tail. The sub-species range from 6.8 – 10 inches or 17 – 25 cm in length (including tail). The plumage is predominantly green. Depending on the species, they also have varying markings of yellow, white, blue, orange and grey on their wings and head.

They were imported into the United States through the 1980s in relatively high numbers.  Most of the imported birds were pulled from their nests and handraised, so they arrived here relatively tame, which made them attractive as pets, rather than being placed into breeding programs. Nowadays, these parakeets are no longer imported because of export restrictions that were implemented to protect these species and as insufficient numbers of them were set up in breeding programs – not all of which were successful – the brotogeris parakeets are now difficult to find. In fact, several of these species are at risk of dying out in the United States.

The most well-known of the brotogeris species is the grey-cheeked parakeet – however, its numbers are dwindling as they have not shown cooperative in captive breeding programs. Other, now more common species, are: 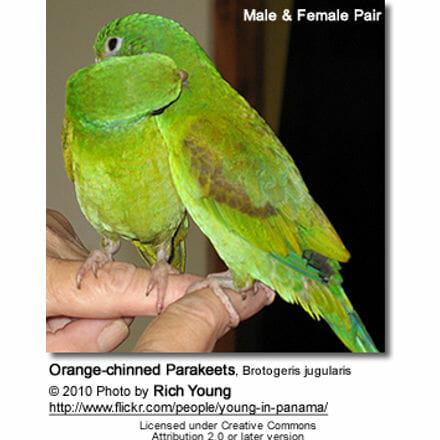 Feral populations have adapted to take in blossoms and nectar; and also take advantage of bird feeders. 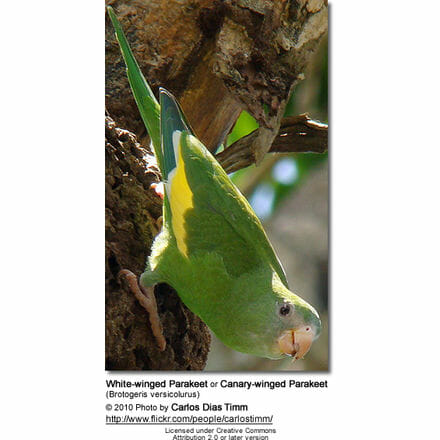 Please refer to the below resources for further information: