Members of the Brotogeris family are smart, curious, energetic and loved for their innate playfulness. These personality traits make them excellent pets. Handfed babies, in particular, have very sweet personalities.

It is easiest to gain their trust and affection if introduced into the family as hand-fed and properly socially babies; however, with a little time and patience, “second-hand” birds can in most cases also be turned into loving and treasured pets.

The most well-known and popular Brotogeris member is the Grey-cheek Parakeet – however, this species is not reproducing well in captivity and is increasingly difficult to find. Therefore, many take a look at the other brotogeris species as they share many of the same personality traits.

Both males and females look alike – so if owners want to know the gender of their pet, DNA or surgical sexing is recommended. 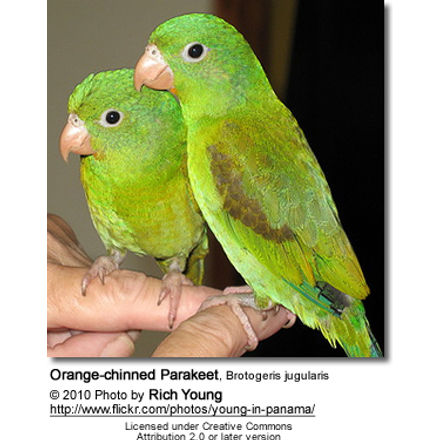 Broto, Pocket Parrot, BeeBee Parrot, Tovi Parakeet – these are but a few of the names given to the charming family of birds otherwise known as Brotogeris Parakeets or Brotos for short.

Brotogeris parakeets make excellent companion birds. They are intelligent and curious, playful and clownish, affectionate and charming. Smaller than a Cockatiel, they are about 7-9″ from head to tail, with predominantly green feathers. Depending on the species, they also have varying markings of yellow, white, blue, orange, and grey on their wings and head.

The most commonly recognized member of the Brotogeris genus are the Grey-cheeked parakeets. Grey-cheeked parakeets have been the most common of the Broto species kept as pets. They were imported by the thousands until the late 1980’s. Because they were so plentiful and inexpensive, very few were set up to breed. As serious Broto breeders have discovered in the past 5-10 years, Grey-cheeks are inconsistent and problematic breeders, and very few young are being produced – not nearly enough to replace the older imported birds who are now dying at an increasing rate. Sadly, owners who were devoted to their now-deceased Grey-cheeks are finding it difficult, if not impossible, to find another one.

At Shady Pines Aviary we have had great success breeding Canary-winged parakeets, and many are available each spring.