Grey-cheeked parakeets or Orange-winged Parakeets (Brotogeris pyrrhopterus) are endemic to Ecuador and Peru west of the Andes. Grey cheeks are sometimes referred to as Pocket parrots, orange-winged or orange flanked parrots.

During the 1970’s until 1992 huge numbers of these birds were imported into the United States. Importation stopped suddenly when a federal bill was passed. Still during those years these birds were very popular. Indeed, they were on the list of the ten most popular birds. 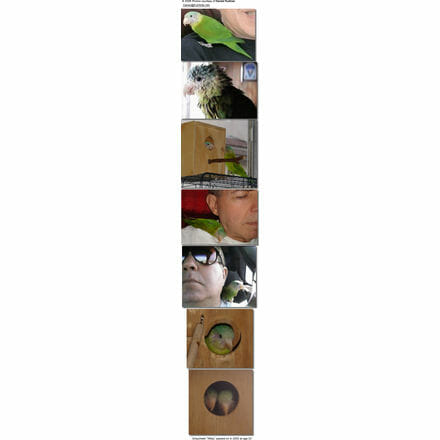 One of the things that made them so popular was that they were very tame. The reason for this was that almost all of the imports were babies that were hand-fed. They were either hand-fed in Ecuador or Peru or right in the U.S. quarantine stations.

The photos of Penny were kindly provided by Daniel Kuttner. While thousands of people are looking for Greycheeks — all the rescued Greycheeks seem to find Daniel … Here is his story:

” I adopted {Penny} from a pet shop where she was left on the doorstep! She was obviously mistreated, as she was fearful of everything. But, I saw in her eyes a desire to belong to something – a flock, a family, something. Jake also came to me from “thin air.” I was in {a} pet shop and a clerk handed me their phone. Mystified, I picked it up. A lady, obviously a bit “off” asked if I would take her male grey cheek. She brought “Lefty” over; he was so pathetic! He only had a nest box, no cage. It and he had obviously been “through the mill.” He was missing a lot of feathers on his face and ear areas.”

Grey-cheeks (Brotogeris pyrrhoptera) are indigenous to Western Ecuador and extreme North-western Peru, favoring subtropical or tropical regions encompassing dry forests, moist lowland forests, shrubland, and arable land. Over the years, they have become popular pets here in the United States – except in Hawaii, where they are illegal.

Indeed, at one time, the Grey-cheeks were amongst the most popular pet birds in America, side-by-side with budgies and cockatiels. Unfortunately, breeding this species has shown to be challenging and because of that, both breeding stock and pet birds are increasingly difficult to find. The general expectation is that the days of this species in the United States are numbered as the original breeding stock and pet birds are dying off.

Their average life span is 15 years; although some have lived to 23 years.

During the 1970s until 1992, thousands of these parakeets were imported from Peru into the United States. Importation ceased when a federal bill was passed to protect this species. In its natural habitat, this parakeet was once abundant – but now as few as15,000 of them are expected to have survived and only in very localized areas – specifically, they still occur in several protected areas; the most important of which include the Cerro Blanco Protection Forest in Ecuador and Tumbes Reserved Zone in Peru.

The cage trade has proven to be the greatest threat to this species, with unsustainably high numbers of birds being trapped and removed from the wild. Strict bans on collection of the grey-cheeked parakeet may prove to be the key to the continuation of this species. However, the survival of the grey-cheeked parakeet in its natural range is also threatened by loss of habitat.

The situation being such, the only hope for its long-term survival is the continued protection of its habitat, the implementation and diligent execution of conservation education programs, the monitoring of wild populations, and the establishment of breeding programs with organizations that have the benefit of extensive knowledge of this species and its special needs.

Grey-cheeks average 8 inches or 20 cm in length (including tail) and weigh 54-60 grams, which means that they are a little larger than lovebirds in size.

Grey-cheeked Parakeets are named after their distinctive grey cheeks, chin and forehead. The plumage is generally green; however,they have a dusky blue crown and bright orange feathers on the underwing coverts.

The bill is horn-colored. The irises are dark brown. The feet are flesh-colored.

Young birds look like adults, but they generally have a slightlyduller plumage. Until they are approximately 6 months old, grey cheeks have black or spotty, black beaks. As they mature, their beaks turn horn-colored.

Grey cheeks are not sexually dimorphic (meaning, both sexes look alike) and need DNA testing to determine their sex.

Grey-cheeks vocalize quite loudly and their calls are described as quick, sharp screeches and may involve many monotone screeches in succession.

The average lifespan in captivity has been between 15 to 23 years.

A bird store owner told me once that they are already tame “when plucked wild from the trees” – and indeed this parakeet is widely kept as pets in its native home.

Here in the United States, breeders have found it challenging to successfully breed this parakeet, and nowadays this parakeet is nearly impossible to get hold of. Many suggest the Yellow-chevroned Parakeet – also a member of the Brotogeris family – as an alternative, as it is similarly sized and shares many of the Grey-cheeked’s endearing personality treats.

Handfed babies have very sweet personalities and are extremely intelligent, curious, energetic, and playful. With time and patience, they can be taught to do tricks, have a good capacity for talking, and are great mimickers. They entertain themselves for hours with their toys and, particularly enjoy braided, fabric, rope perches.

They like toys and places to hide – which may be the reason why they are also referred to as pocket parrots. The will ride around on your shoulder or snuggle up in your pocket as long as you will allow them. Just like the lovebirds, Greycheeks like to crawl under or into something that gives them a sense of security and privacy – which could be anything they can climb into, such as a finch or parakeet nesting box, or visit this website for some fun options for “snuggle tents” (some may also be available at your local petstore). (

They are not as noisy as their larger cousins – the macaws, cockatoos or conures, but can become loud when over-excited or if they are trying to get your attention. Training is important to make sure that they don’t develop any bad habits, be it screaming or biting.

Grey cheeks are known to be mischievous, bold, and inquisitive. Their fearless nature can get them easily “into trouble” and they need to be watched when outside of their cages. They challenge larger parrots and even other, larger pets, such as dogs, which can result in them getting attacked and bitten. They also sustain injuries from their climbing, jumping and wandering tendencies. As they are cuddly birds and like to burrow in tight places, they also are at risk of being smothered by their owners as they like to snuggle up close to them and owners unwittingly roll over or sit on them. Reported accidents also included them being stepped on, flying into ceiling fans, hot burners, or open toilets.

With patience, these birds may be taught to mimic human sounds, albeit without the clarity of larger parrots

Pet parrots generally present challenges, such as excessive chewing – especially at certain stages in their life. They do discover their beaks as method of “disciplining us” once they are out of the “baby stage” and they can generally be somewhat naughty, and it really is important to learn to understand them and to guide their behavior before an undesirable behavior has been established.

Undisciplined parrots will chew on electric wiring potentially causing house fires. They regard anything in your home as a “toy” that can be explored and chewed on; destroying items that you may hold dear or are simply valuable.

Even a young bird that has not been neglected and abused requires proper guidance; this becomes even more challenging when it involves a rescued bird that mayrequire rehabilitation.

Web Resources: I put together web resources for you to help you understand your pet bird and properly direct him. Please visit the following website to learn more about parrot behavior and training.

Brotogeris as Pets – Find out about their personalities and care requirements