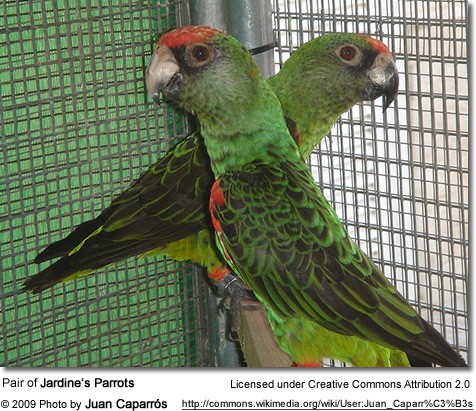 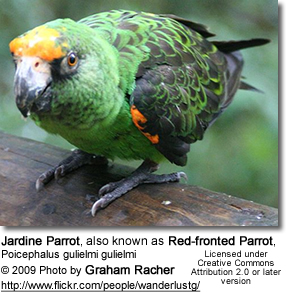 Jardine’s Parrots (Poicephalus gulielmi gulielmi) – also known as Red-fronted Parrots, Congo Red-crowned Parrots or William’s Fig Parrots – are one of the largest Poicephalus species. They are native to west, central and east Africa.

The first Jardine’s Parrot to be scientifically identified was named Congo Jack. The parrot was brought back live from the Congo to the United Kingdom by Sir William Jardine’s son on his return from a three-year cruise. Sir William Jardine gave the species the binomial name Pionus Gulielmi after his son, William R.N. (Latin: Gulielmi means “William’s”).

The average lifespan of Jardine’s Parrots may exceed 60 years, but most captive birds live about 30 years. 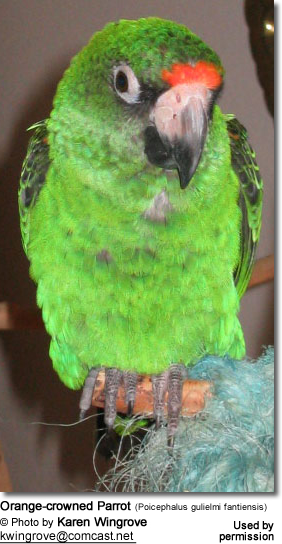 They have bare eye-rings that are pinkish-white in color. The upper bill is grey, with a horn-colored base and a dark tip. The lower mandible is dark grey / black.

The plumage is mostly iridescent green with a narrow black scalloping on most feathers of the head, neck, back, and wings. There are distinctive orange-red markings on the forehead, thighs and edge of the wings; and the brownish-black wings and tail. The extent of red or orange to forehead, the bend of the wing and thighs vary depending on the subspecies; and indeed may be completely absent in some birds. These markings also tend to increase with each molt. The rump and upper tail coverts are a lighter yellowish-green. The abdomen occasionally is tinged with blue.

The eyes are either red-orange (males) or orange-brown (females). The eye rings are pinkish-grey, and the legs are grey-brown.

Females look similar to the males, except they have a slightly brighter plumage and orange-brownish eyes (compared to the male’s reddish-orange eyes). However, these differences are slight and the gender is difficult to identify by external appearance alone.

Juveniles have a paler plumage; and they lack the orange-red markings on the head, thighs and wings. They have a blackish plumage above the beak instead. The green edging to the feathers is narrower; and their breast and abdomen have a bluish tinge. Immature birds also have a paler beak and brown irises.

Jardine’s Parrots are native to Africa, where they have a wide range. Specifically they occur in Southern Cameroon and Central African Republic to northern Angola.

In Kenya and Tanzania, they inhabit lowland rainforests and primary montane forests, up to an altitude of 3,250 meters (~ 10,660 feet). They also occur in secondary forest and, in some areas, on coffee plantations.

Red-fronted Parrots are generally sociable and are usually found in groups of up to ten birds, both when feeding or roosting in trees.

This species is potentially threatened by trapping for the pet trade and is now listed on Appendix II of the Convention on the International Trade in Endangered Species (CITES), which has made the trade, import and export of wild-caught Jardines Parrots illegal. 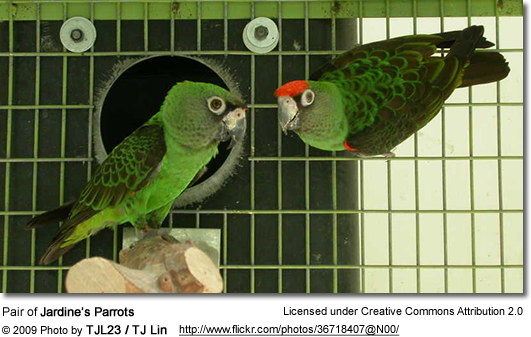 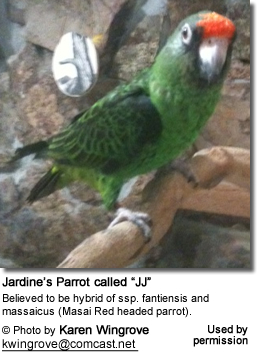 The Red-fronted Parrots typically nest between November and January in Tanzania, in March and November in Kenya, and around September in the Congo Basin.

Jardines typically nest in tree cavities, situated up to 40 feet (12 meters) above the ground.

The average clutch consists of 2 – 4 glossy white eggs, which are incubated by the female for about 28 days. Both parents feed and care for the young. The young leave the nest when they are about 10 to 11 weeks old.

Jardines are fairly noisy, with high-pitched, harsh calls in flight and while perched. Flocks are usually very loud and constantly babbling.

While feeding, quieter whistling calls can be heard.

This species is great choice for those who want to “step up” to a mid-size parrot, and their popularity as pets is increasing due to their loyal following and increased availability. Their compact size, sweet temperament and mostly quiet disposition makes them a good choice for apartment dwellers, when compared to the larger, louder parrots.

They are particularly playful and intelligent, and are capable of developing large vocabularies even without any training and often with human-like qualities. Both the male and female are equally adept talkers.

They are animated and clowny birds that easily learn tricks and sound effects, such as phones, whistling, barking, and other sounds that may be typical to your household.

Many may become pretty nippy though, so some training may be necessary; and they are heavy chewers and training is necessary to keep your pet from developing bad habits.

This energetic parrots require a large amazon-sized cage with heavy duty bars as they have rather strong beaks.

A pedicure perch (also commonly referred to as “grooming perch”) is recommended to keep its nails trimmed. Long nails can be very painful when digging into an owner’s arm and they can get caught in clothing and toys. If the grooming perch is used for several hours a day, you should never have to worry about clipping your pet’s nails again. This can be achieved by placing the perch in an area where your pet likes to hang out.

Also please check out this webpage: The 3 Key Elements for Keeping Your Pet Bird Healthy and Happy 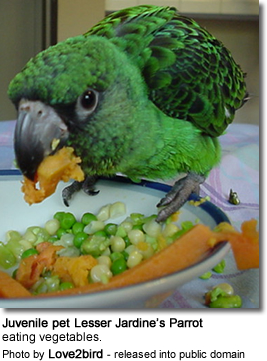 The Red-fronted Parrots feed on a variety of seeds, insects, flowers and fruits, including the fruits of the oil palm, Elaeis guineensis.

They usually feed in flocks, including joining larger feeding flocks; and, in some areas, they may travel up to 60 km (37 miles) each day to reach their favored feeding sites.

Pairs or small groups of them are usually seen flying swiftly between their night-time roosts and feeding grounds, being easily detected by their noisy contact calls. They typically feed quietly in the upper canopy of trees, where they are well camouflaged.

They should be provided with a varied diet, including a base diet such as Harrisons, LaFever, Zupreem or Roudybush supplemented with nuts, fresh veggies and fruits every day.

Their beaks tend to grow really fast and may need to be trimmed professionally. However, providing a couple of almonds a day will help keep the beaks trimmed.

Common Diseases of the Jardines

Distribution: Inhabits the highlands of southern Kenya and northern Tanzania

Description: As gulielmi, but plumage generally paler; forehead and crown orange; completely absent in some birds (may apply only to males); bend of wing and thighs without orange-red in most birds; green edging to back and wings broader; iris brown; smaller. Sub-species described by Neumann as permistus does not consistently differ from nominate type sufficiently to justify classification as sub-species. … Length: 26 – 28 cm (10 – 11.2 ins)

Distribution: Highlands of Kenya, except in the south.