Mitred Conures (Aratinga mitrata) – also known as Red-headed Conures, or Mitred Parakeets – are the second largest of the conure species.

Mitreds are endemic to the Andes from north-central Peru, south through Bolivia, to north-western Argentina. Introduced populations exist in California, Florida and Hawaii. 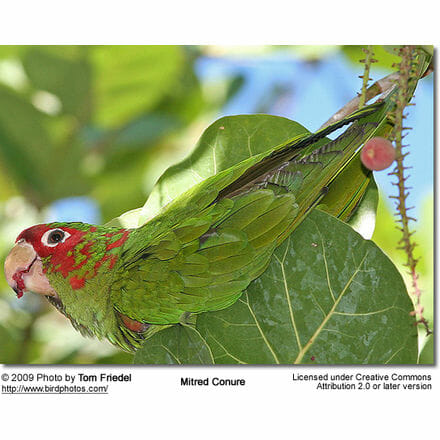 They are amongst the most beautiful conures. Adults are mainly green with varying amounts of red to the face and thighs. They have relatively conspicuous bare white eye-rings and heavy, pale bone-colored bills.

Unlike its relatives, the Red-masked, White-eyed and Cuban conures – adult mitred conures at most show one or two red feathers at the bend of the wing. Mitred conures may have red feathers scattered variably on hindneck, mantle, throat and thighs.

Immature birds show little or no red to the plumage. Mitred Conures can take up to ten years to develop their full red-headed coloration, hence the drastic difference between individuals. Even with adult, fully-colored birds, there is a great variance in the amount of red they end up with.

The Mitred Conures are popular pets as people enjoy their clowny and inquisitive disposition, in addition to appreciating their excellent talking ability.

However, they can be nippy at times (as is the case with most conures) and they tend to be noisy, also a trait shared with the other conure species. These personality traits make them unsuitable for inexperienced owners who are looking for an easy pet.

Mitreds are typically cooperative breeders. One of the challenges might be to find a nestbox they will accept. If this turns out to be a problem, offering a offering a choice of sizes and types of logs or nest-boxes – placed in various locations within the aviary – will allow the parent birds to identify their preferred nest box.

Once a pair has chosen a specific nest-box/log keep that one for their exclusive use.  At this point, any spare nest boxes can removed, cleaned and used elsewhere. 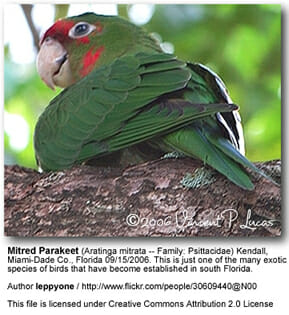 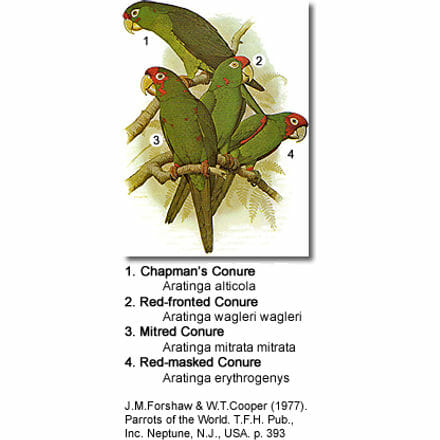