The Eclectus Parrot (Eclectus roratus) is native to the Solomon Islands, New Guinea, northeastern Australia and the Maluku Islands (Moluccas). 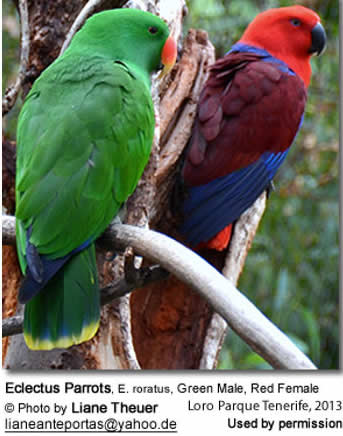 Eclectus Species (including the species most commonly kept in captivity) 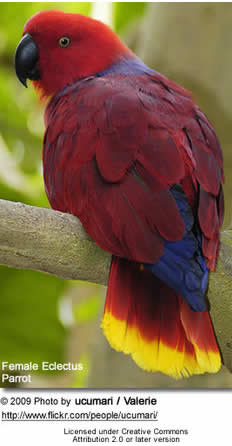 Their extreme sexual dimorphism (visual physical differences between the sexes) is very unusual in the parrot family. Indeed Joseph Forshaw, in his book Parrots of the World, noted that the first European ornithologists to see Eclectus parrots thought that they were of two distinct species.

The following overview and chart have been provided by Avianweb Contributor Dr. Rob Marshall – the author of A Guide to Eclectus Parrots as Pet and Aviary Birds

The Eclectus Parrot is the most sexually dimorphic of all the parrot species. The contrast between the brilliant emerald green plumage of the cock and the deep red/purple plumage of the hen is so marked that the two birds were, until the early 20th century, considered to be different species.

The birds inhabit the nutrient rich canopy of lowland rainforests and remarkably, amongst the shadows, the hen is very difficult to see despite her brilliant colours.

From below, the claret and violet colors of the hen high up in the canopy appear black against the bright sky, and of course the green of the cock blends splendidly with the colours of the rainforest.

Their presence is usually noted by their calls rather than by their brilliant but well-camouflaged colors.

The Eclectus as Pet

Eclectus are remarkable birds and ideally suited as a pet. When taught properly, they are capable of cognitive behaviour from a very young age.

The ability of the Eclectus to communicate with humans is a result of their extremely inquisitive nature, a feature strongly linked to their life in the rainforest canopy. This habitat is a rich environment requiring a heightened visual and audible intellect to master.

The Eclectus has developed a complex breeding culture in this crowded vegetative habitat, resulting in communal breeding where uncles and aunties help rear young in a creche-like situation. This sharing and caring feature of the Eclectus makes them naturally the perfect pet.

When treated in a similarly caring and intelligent way they will quickly learn to communicate cognitively. Eclectus also prefer a calm environment and have a strong ability to notice changes within their normal surroundings.

These highly intelligent birds are very animated and love to participate in daily activities and in doing so, will quickly become acquainted with a daily routine.

Eclectus can be kept with other parrot species although it is extremely important that any new bird is introduced in the correct fashion. This involves providing one on one attention with the original bird and as much as possible, maintaining its normal daily routine.

Regular and consistent training form an integral part of the Eclectus development and with the correct love and attention, this highly intelligent bird makes an excellent pet.

Although the Eclectus is a beautiful bird both physically and temperamentally, its personality in the past has been misunderstood. This species has been characterised as boring, dull, lethargic, shy and even stupid.

What the casual observer is seeing, however, is the Eclectus Parrot’s reaction to stress. When confronted with unfamiliar situations or strangers they freeze and wait. In familiar surroundings and with people they know they are garrulous, highly animated, curious, affectionate and playful.

All Eclectus subspecies share similar behaviors and personalities but with slight differences, for example Solomon Island and New Guinea Eclectus are more docile than the large domineering Australian Eclectus, and when hand reared are considered to make the best pets. Although the personality of hens is different from cock Eclectus, it is questionable whether hens or cocks make better pets.

Eclectus have a wide and most unusual range of sounds, including soft bell or gong tones, coos, whistles, comic konks and squeals. Most are very pleasant to the ear. However, they also have the ability to scream or indulge in raucous screeching when frightened, disturbed or excited. Eclectus Parrots also voice words and phrases very clearly.

Females kept as pets may lay eggs even without a compatible male partner (a male Eclectus parrot).  Most will reach reproductive maturity when they are about two to five years old; although the smaller Solomon Island subspecies may be able to reproduce at an age of eighteen months.

The average clutch may consist of 2 eggs; on occasion 3 or, rarely, 4 eggs may be laid.

Of course, without a male, the eggs will be infertile.  It is important to allow the female to  complete the laying and incubation of the eggs.

Removing the eggs will result in the female replacing them, which can lead to serious malnutrition.

If hormonal behavior in a broody female is becoming a problem (as it often does), there are ways to discourage nesting behavior in pet birds. When I think of Eclectus, what comes to mind is: beauty and serenity.

They do make great pets in the right household — as they are less noisy and destructive than other larger parrots (although they can scream quite loudly when they get spooked, scared or excited).

They learn to talk as well — always sounding like “little girls” — with pretty clear voices, too. They are less demanding than cockatoos for sure, but they are not exactly known “for learning tricks”. However, they do have an endearing, clowny personality.

I found the male eclectus to be quite sensitive, who easily starts plucking himself when under stress — once the stress is eliminated, and provided the habit hasn’t been established yet, he will stop plucking. The challenge is to identify the stress factor. It could be as easy as relocating the cage, or as complex as keeping him separate from another pet.

My experience was that the female eclectus seems to be able to cope with busy / noisy households better than the males. The sensitive male eclectus oftentimes is better suited for a quiet home (maybe without kids?).

Although neither the male or female are cut out to be part of busy / stressful households — in my opinion. Personalities do vary — as they are influenced by genetics and the amount and type of attention he or she got while being raised.

The male is less aggressive than the female, more gentle in nature; which means the female is more apt to bite and may make the male a better pet for people who prefer gentle natured animals. 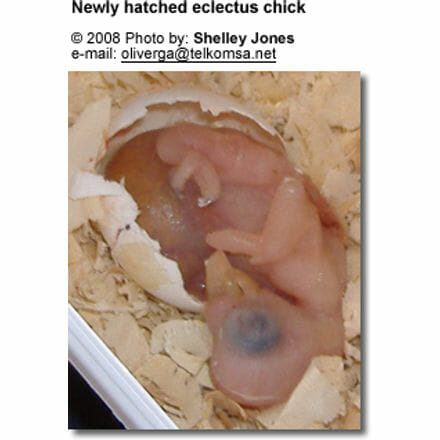 The eclectus parrots don’t produce any feather dust, as they have oil glands rather than dust gland for preenings – which is good news for people who are allergic to feather dust.

Eclectus are very intelligent and focus their eyes on their owner to closely observe every movement. They show interest in everything going on around them, and love to explore.

The average lifespan of an eclectus is 30 years; but they should be able to live 50 to 75 years — as is the case with comparably-sized parrots.

In the United States, they cost between $600 and $2,000 – depending on source, location, and availability.

In captivity, Eclectus Parrots do well in large or suspended aviaries having at least three and a half meters of length and one meter of width. They will need to be sheltered from the elements and are generally kept in pairs.

If kept indoors as a pet, Eclectuses love to climb and play and need to be provided with a roomy cage that allows them to move around freely. Plenty of out-of-cage time and interaction with the human family is necessary.

To keep this intelligent parrot in a cage the entire day would without a doubt lead to severe behavioral and psychological problems. Toys will help them entertain themselves at those times when your parrot is alone.

Eclectus Parrots are prone to stress-induced feather plucking. Stress may be caused by a dominant mate or by changes in husbandry practices. Nutritional deficiencies, boredom, or cold temperatures may also cause feather plucking. Branches and chew toys may divert yoru parrot from feather destruction.

Eclectus parrots typically enter “puberty” when they are about 18 months to a year old. They will try to ‘feed’ objects of their affection, which could be their owner’s hand or a favorite toy.

It is generally recommended not to reinforce this behavior as they can get quite aggressive in their quest to protect their “nesting territory” as well as chosen “mate.”

The general recommendation is to distract them with toys or activities. Managing Hormonal Behavior in Birds 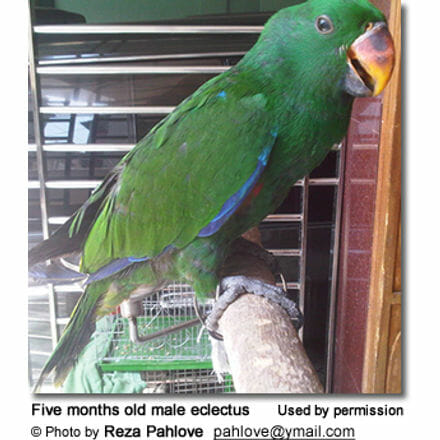 Some eclectus owners observe their pets in an activity that is referred to as “toe-tapping” – – a condition where the toes repetitively extend and contract. This may occur alone or in combination with wing flipping and /or feather plucking. 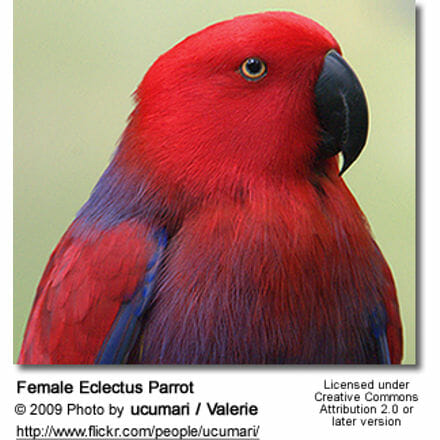 Eclectus parrots are amongst the most intelligent parrot species. They are also great talkers.

If not properly trained, they can present multiple challenges to their owners, such as excessive chewing – especially at certain stages in their life. They do discover their beaks as method of “disciplining us” once they are out of the “baby stage” and they can generally be somewhat naughty, and it really is important to learn to understand them and to guide their behavior before an undesirable behavior has been established.

Even a young bird that has not been neglected and abused requires proper guidance; this becomes even more challenging when it involves a rescued bird that may require rehabilitation. Eclectuses that are not provided sufficient mental and physical stimulations may turn into a feather plucker.

Overall, it is important to guide parrot behavior: