If you want to know about the Eclectus Parrots and their Sub-species Identification, visit Beauty of birds and get all the related information in one place. 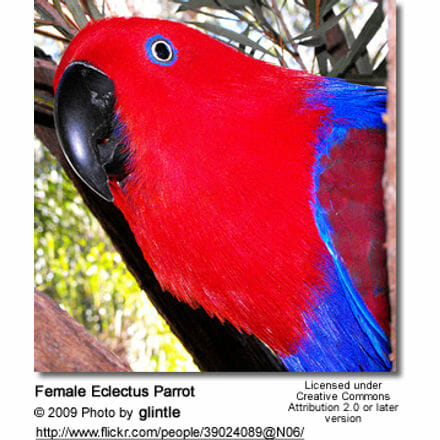 The following information and photos (unless stated otherwise) are copyrighted and have been reproduced with the permission of the owner of the material: Dr. Rob Marshall – an avian vet and bird breeder in Australia, and author of “A Guide to Eclectus Parrots as Pet and Aviary Birds“.

In Australia, the most frequently kept Eclectus parrot subspecies are hybrids of the

In America, the most commonly kept sub-species are the:

In Europe, the most commonly kept sub-species are:

Identification of the subspecies is challenging in the female and almost impossible in the male without knowledge of the area of origin or domestic breeding history.

Females of the different subspecies may be distinguished from each other by differences in size and color. It is Dr Rob Marshall’s view that identification of Eclectus hens is made easier when the subspecies are divided into three groups:

Hen classification of some of the subspecies remains difficult without knowledge of their geographic origins.

Females of the Blue (polychlorus) group have a blue eye ring, blue breast colour and lack yellow in their plumage.

There are five subspecies in the Blue (polychlorus) group: 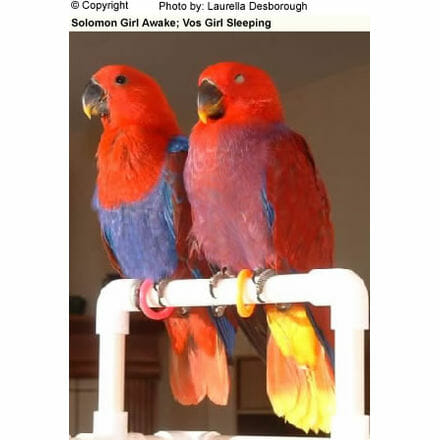 There are two subspecies in the Purple (roratus) group:

These subspecies have no blue eye ring. The different colour purple of the chest feathers readily distinguishes one from the other. E.r. roratus has a purple colored breast and dark maroon colored wings. E.r. vosmaeri is brighter colored than E.r. roratus. The breast is pretty lavender (pale purple) and wings are a fire engine red colour.

There are two subspecies in the Red group:

Both these subspecies are entirely red. E.r. cornelia is larger but has no yellow on the tail contrary to E. r. riedeli. 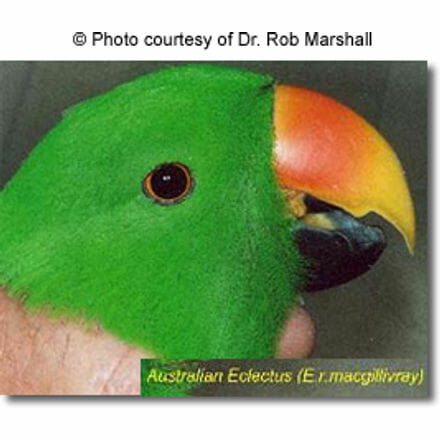 Identification of the males from most subspecies remains difficult and relies upon differences in size and shade of green of the plumage. Both size and depth of green however may vary considerably within the same subspecies.

Male Eclectus are difficult to distinguish into species with the exception of macgillivrayi, riedeli and westermani.

Variation between individuals of the same sub-species also creates complication in identification.

Further classification difficulties arise because interbreeding of subspecies has been common in the past. As a result, confusion often arises when attempting to identify the exact sub-species of captive bred Eclectus Parrots.