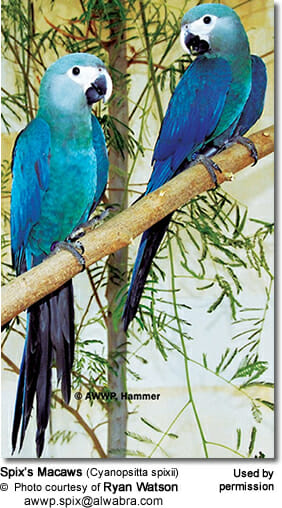 The status of all macaw species in the wild are of concern. Large numbers were exported to the United States and Europe the beginning of the 20th century. The majority of macaws are now endangered in the wild; several are highly or critically endangered, others are threatened with extinction and five or more species are already extinct – mainly due to the rapid rate of deforestation, hunting, and the illegal trapping for the pet trade.

Therefore, all macaws are listed on the IUNC Red List of Threatened Species and are subjects of conservation; and bird importation is now greatly restricted. However, endangered exotic birds are still targeted by poachers for the illegal exotic bird trade, as collectors are willing to pay many thousands of dollars for one of these “trophy birds.” Thousands of endangered birds get injured or killed – either as they are trying to protect their young that poachers take from their nests, or as they are captured themselves, or they die in transit, as they are cramped into tight spaces that are designed to conceal them from authorities.

Fortunately, many species are thriving in captivity and their captive-bred offspring is readily available – making those parrot species less attractive to collectors and to poachers.

CITES, the Convention on International Trade in Endangered Species, establishes world-wide controls on the international trade in threatened species of animals and plants. It requires that this trade be subject to authorization by government-issued permits or certificates. In the case of species threatened with extinction, CITES prohibits all commercial trade in wild specimens. The Convention was signed in 1975 and more than 125 countries are members.

Appendix I: Species endangered and trade is permitted only in exceptional circumstances

Appendix II: Species which would become endangered unless trade is regulated

The Saint Croix Macaw (Ara autocthones) belongs to the parrots and was found on the island of Saint Croix, in the Virgin Islands. The only remains known are a sub-fossil left tibiotarsus (long leg bone), which has been found in the kitchen middens at Concordia, which is near Southwest Cape.