The Moustached or Mustached Parakeet (Psittacula alexandri alexandri) – also known as the Java Mustached or Red-breasted Parakeet – is endemic to the Himalayas and southern China to Indonesia.

The Mustached Parakeet is the nominate form of eight different subspecies.

The average lifespan of the Mustached Parakeet is 20 to 25 years.

Its most distinguishing feature is its moustache-like markings on the sides of its face, resembling a moustache. In most subspecies of Moustached Parakeets, the males have red beaks and the females have black.

The male Moustached Parakeet is attractively shaped, slim, with a long and thin tail, green plumage, a grey head, red bill, and distinguishing markings on its head and face. The area around the eyes is greenish and his heads have a pretty bluish tinge. There is a thin line across its forehead and wide stripes on his cheeks. The plumage on the breasts, throat and upper abdomen is pink / salmon extending half way to the vent.

The hen has a bluish tinge through the face region. They generally have a duller pink color on their chests and their middle tail feathers are shorter than the male’s feathers.

Young birds are difficult to sex, however, breeders have successfully identified males and females. The hen’s head is more evenly arched from the cere to the back of the head. The young males tend to be flatter on the forehead. Hens appear to have a darker bluish face.

The Mustached Parakeet is an intelligent and outgoing bird that is gaining increasing popularity worldwide. These parrots are outgoing and playful, and do well if properly socialized.

They can be a bit bossy and aggressive, if not disciplined appropriately, but they can still make good first birds. They are very intelligent, and need a good size cage with plenty of toys to prevent boredom.

Though this bird is related to the Ringnecks, they are quite different in personality. They are reported to be mellower and not as noisy as the Ringnecks, though the Mustached Parakeet has been described as “feisty.” They are generally calmer than the Indian and African Ringnecks as well as the Plumhead.

They are also excellent eaters and will readily sample new foods that other birds may pass up.

The Mustached Parakeet is related to the Ringneck Parakeets, and like them, they can often talk, though they are not as clear of speech as some of the larger parrots, such as the African Grey. However, they are reported to speak with more clarity than the Ringnecks.

If you want a smaller parrot with a lot of personality, the Mustached Parakeet may be the bird for you. However, they are also “opinionated” and have been described as stubborn. Not surprisingly so, considering their intelligence. Obedience training is strongly recommended.

The Mustached Parakeet is a voracious chewer and should be provided plenty of chew toys. Other toys are also a must to stimulate this intelligent bird. If they are not given plenty of exciting toys, they will grow bored and behavioral problems can result.

Like other parrots they require companionship, and if you keep them singly you must be able and willing to spend large amounts of time with them. The same is true if you want to maintain their tameness. They should be handled regularly and be well socialized.

In the wild this bird is often seen in flocks of 10 to 50 individuals. These flocks may often be heard before they are seen. This is a fact that should be kept in mind before deciding to purchase a Mustache Parakeet.

Breeding hens may lay 3 to 4 eggs in each clutch which she incubates for about 22 days.

The Mustached Parakeet is among the more widespread species of the genus and is the species which has the most geographical variations. Most of the subspecies are confined to small islands or a cluster of islands in Indonesia.

Some of the island races may be threatened by the wild bird trade. The nominate race which occurs in Java is close to extinction. Feral populations of this species have now established themselves in cities like Mumbai and small numbers occur in other cities such as Chennai and Bangalore in India.

The Mustached Parakeets are commonly bred in captivity. They reach maturity somewhere between 2 and 3 years of age. It is recommended that birds be paired up at a young age. The female may at times dominate the males. Courtship starts in late winter and the hens can be seen begging the males to feed them.

In the wild they breed between the months of December and April, though this is variable depending on the weather and altitude. A thick-walled hollow log can be provided as a nesting box. If not available, a commercially available nesting box should suffice.

They require long aviaries, rather than wide, as they are strong, straight flyers. They also like a protected area when breeding. The entry-door to the aviary should be at the opposite end. Double-wire between flights is recommended to prevent birds in adjoining aviaries from biting each other – especially during breeding season.

Egg laying generally commences early spring and clutches vary from 2 to 4 eggs, which are incubated for about 22 days.

If this is not done, many of the young will die of head injuries or severely damage their scalps. Fledging chicks don’t have a great amount of control as they start flying.

The young can be left in with the parents for 9 months, but must then be removed as the parent will be ready to bred again. The young wean at 12 – 14 weeks.

Taxonomy and Other Data:

Description: As nominate Mustached Parakeet featured above, but larger and with heavier bill; salmon-pink breast and abdomen feathers slightly darker in some birds; upper and lower beaks are red in both sexes. | Length: 36 cm (14 ins), wing length 172 – 180 mm (6.5 – 7 ins) 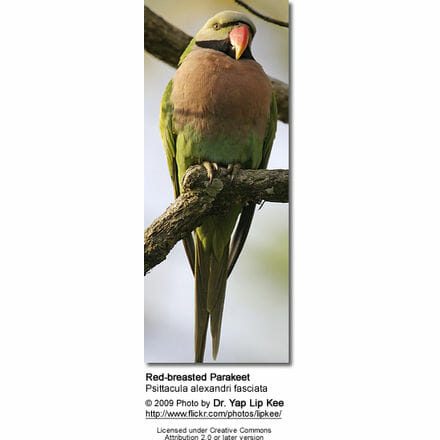 Female as male, but breast and upper abdomen darker pink without lilac-blue tinge; pink extends up to sides of neck; upper and lower beaks are black.